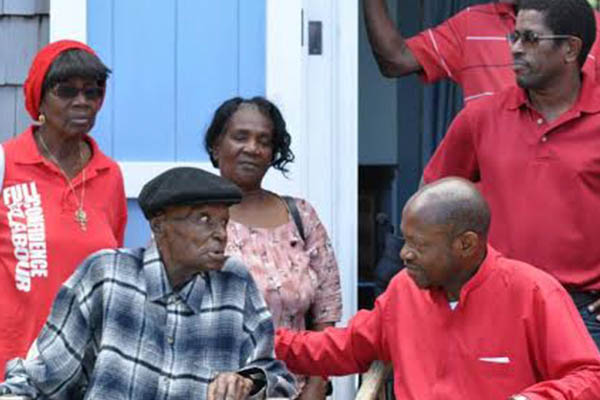 The Saddle Hill Adventure Park and the AgroTourism Farm were among venues visited, but the stop over to the 400 acre resort development Kittitian Hill was a very special one.

At the age of 101, Wilfred Martin is the oldest man living in Constituency #6 and one of the oldest in the Federation. During a visit to seniors in that area on Tuesday (March 25), Prime Minister Dr. Denzil Douglas stopped by Mr. Martin’s home. While sitting in his living room enjoying “old talk” with his parliamentary representative, family members revealed Mr. Martin’s desire to see the houses at Kittitian Hill, the area where he once grazed cattle and other livestock.

“You want to go up to Kittitian Hill,” PM Douglas asked, pointing to the development visible from Martin’s living room. “We have to do it. I’m going to come back and take you up there,” promised the PM.

Just two days later, Mr. Martin was the guest of honour as he joined the Prime Minister and several other persons from the community at the five-star development project, due for a soft opening in July 2014. The centenarian saw the organic 18-hole championship golf course dubbed Irie Fields and went inside one of the many cottages on the 400 acre property.

Co-developer Patrick Liotard-Vogt welcomed the touring party and Mr. Martin. “Do you like it?” he asked the senior citizen. “How you mean,” Mr. Martin responded in the positive, using a colloquial slang. “I live to see it, I live to see it,” he expressed.

Wilfred Martin spent some time reminiscing about the changes to the island over the decades and spoke about the struggle to empower the masses during the 60’s and 70’s. He mentioned the time that workers had to steal trash (primarily sugar cane stalks) from the plantations to use as materials to make a roof for their houses. This birthed the term “trash house.” The St. Pauls resident credited the nation’s first Premier the late Right Excellent Sir Robert Bradshaw for elevating the common man.

“He bring hookup house,” he explained, referring to the term used to describe the construction of the upgraded houses for the masses. “From the trash to hookup houses, you see.” Mr. Martin turned to Prime Minister Douglas and noted Premier’s Bradshaw’s passing in 1978.  “… The master took him, PM and sent you in his room.”

The tour was organized as part of the Prime Minister’s 25 years of service in the Federal Parliament. Mr. Martin’s next birthday is August 11, a few days after St. Kitts and Nevis celebrates Emancipation Day.