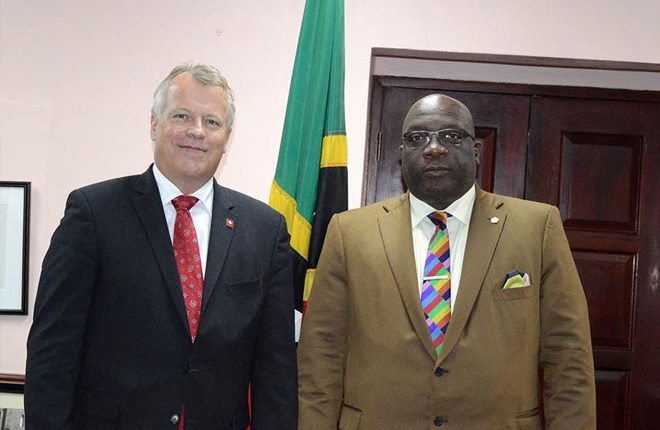 Ambassador Schnider paid a courtesy call on Prime Minister Harris at his office at Government Headquarters on Wednesday, July 13. This was preceded by a meeting at Government House, where the visiting ambassador officially presented his credentials to Governor General, His Excellency Sir S.W. Tapley Seaton, GCMG, CVO, QC, JP.

Also attending Wednesday’s meeting with the Prime Minister were Permanent Secretary in the Office of the Prime Minister, Mr. Andrew Skerritt and Foreign Service Officer in the Ministry of Foreign Affairs, Ms. Thouvia France.

During the meeting, which Prime Minister Harris described as “productive”, the officials discussed a wide range of issues including the parameters for establishing a Permanent Mission to the United Nations and other international organisations in Geneva.

In this regard, Ambassador Schnider noted that St. Kitts and Nevis stands to benefit from a range of privileges, immunities and facilities, in addition to financial support.

“We want to feel the presence and the impact of our friends and allies in Europe,” Dr. Harris stated. “That for us is very important and we hope in your Government we find a Government that is willing to assist and to provide support for us so that we can grow and reach the proper levels of development that our people aspire to.”

It is the hope of Prime Minister Harris that Switzerland, being a world leader in banking services, advocates in the international fora for the maintenance of relations with the correspondent banks in the region, and more specifically, those in St. Kitts and Nevis.

The Honourable Prime Minister also impressed upon the visiting ambassador St. Kitts and Nevis’ intention to move away from the use of fossil fuel to alternative energy sources – including wind, solar and geothermal energy – and called upon the Government of Switzerland to assist in this regard.

Prime Minister Harris ended by extending an invitation to Ambassador Schnider to represent Switzerland when St. Kitts and Nevis’ celebrates its 34th anniversary of Independence on September 19th, 2017.

During his current visit, Ambassador Schnider is also expected to travel to Nevis where he will meet with Premier of Nevis, the Honourable Vance Amory, as well as Deputy Premier and Minister of Foreign Affairs, the Honourable Mark Brantley.