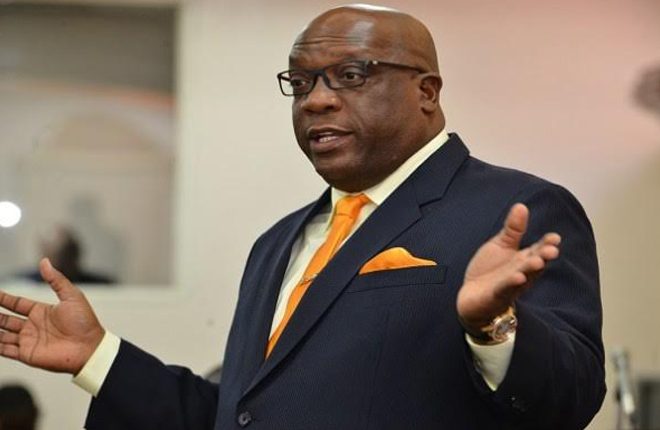 (SKNIS): Prime Minister Harris and Minister of National Security, Dr. the Honourable Timothy, urged citizens and residents to play their part as it relates to safety and security in the federation, as security begins with each and every one.

“This babying up of people in our communities who we know are on drugs and who we know have guns, we have to stop it for the safety of our country, and all of us have to play our part. Security begins with you and when you have people in your house who you can’t control ask them to leave because once they are under your roof they must be subjected to your control,” said the minister of national security, while speaking at the Good Governance and Accountability for Prosperity” Town Hall Meeting on Tuesday, January 24, at the Joshua Obadiah Williams Primary School in Molineux. “And you have to start early when they are in primary school to give them limits and to take charge. You have to start early. Let’s get back to the good old time values that have kept our country strong and that led to the development of strong families.”

Prime Minister Harris made his concerns known and said that much more can be done in the communities. He noted that people should be able to walk anywhere in St. Kitts and Nevis at any given time of the day without fear. Dr. Harris said that his government will do all in its power to ensure that persons are safe and secure.

“We will give every encouragement and every support to the security forces to do their work. Whenever the agents of law clashes with the agents of unlawfulness and illegality, the agents of law must win every time because we have to wipe out lawlessness in order to build the kind of prosperity to which we as a team are committed to, and I make no apologies because on this matter of law and order I draw a line in the sand.,” said the prime minister. “And when people get caught with guns and drugs I want to remind you to do not call me to intervene. I am the minister of national security and I stand fully and uncompromisingly in support of the security forces and I want you to stand with me. There is only one way in which we will turn the tide and we have to be clear.”

He warned that persons should not envy anyone for what they have because they know not how they achieved it.

“That is still a good message because to have people dealing in drugs and coming to your house and have you being subjected to police raids and raids by the security forces is not worth it. To have them come in and every time there is a knock at the door they wondering if it is them or for you, it is not worth it. And we have to start in our homes to say no to drugs and not to wrong behaviour,” said Prime Minister Harris. “Those of you who are heads of households I issue a warning. Join the fight for good governance for this is part of what the message is about. Good governance starts with getting the processes and the procedures right and start getting them right in your home. Start with the young children by exposing them to Sunday school, start giving them the moral fiber that lifts them up so that when they are faced with a decision they can say I would do this but I know this not right.”

Prime Minister said that morals and conscience must be developed and the only way he knows how to do so, is for parents to send their children to Sunday school, as one tends to learn more in Sunday school than he/she would learn in church.

Dr. Harris used the occasion to encourage persons who have children, in particular males, who are looking for work, to send them to register at the St. Kitts-Nevis Defence Force (SKNDF), as the institution will be recruiting a batch of 30 come February 2017. He noted that this will allow the young people to be disciplined, develop their skills and a sense of security – security for themselves and security in working in defense of the Federation of St. Kitts and Nevis.