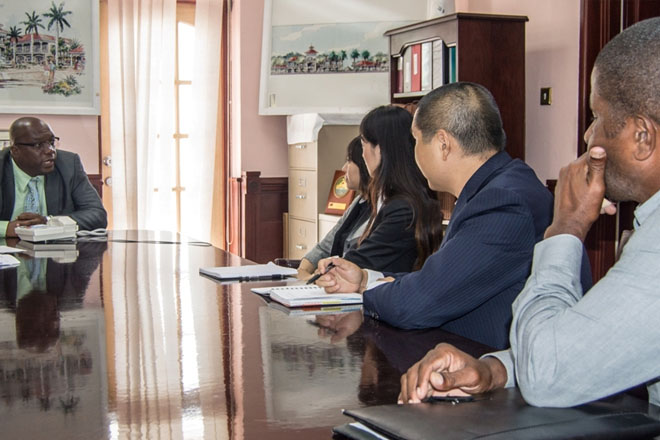 Basseterre, St. Kitts (SKNIS) — Meetings with investors, diplomatic representatives, and university students are all in a day’s duties for Prime Minister of St. Kitts and Nevis Dr. the Honourable Timothy Harris.

One such day was March 18, when after settling into office and addressing necessary tasks, including reading urgent correspondence and other matters – the first meeting took place just after 10 a.m. This was with Chief Executive Officer of White Gate Development Corporation, Ellis Hazel who introduced representatives of the Caribbean Galaxy Real Estate Corporation – Chief Executive Officer Ying Jin and General Manager Walter Tang along with a translator.

The meeting began with the usual courtesies of Galaxy representatives thanking the Prime Minister for giving them an audience and the expression of the desire to continue Phase 1 of the development project. The Prime Minister responded by assuring that the Government of National Unity is in favour of the continuation of genuine developmental activities including the Galaxy project. Subject matter discussed included the fact that the project fell under the Citizen by Investment (CBI) programme, that Phase 1 is located in Helden’s Estate in the White Gate Development and consists of eight acres of land which is expected to house a five-star hotel including villas, pools, a spa and recreation area.

The Malaysian High Commissioner for the region, His Excellency Mahindra Singh all Ram Singh entered the Prime Minister’s Office next to pay a courtesy call. He expressed the desire for St. Kitts and Nevis and Malaysia to cement their relationship. Background information about Malaysia was provided including that Malaysia was the fourth largest in the South East Asian group of ten countries. He emphasized that his country continues to grow and extended an invitation to the Prime Minister to pay a visit to Malaysia and the other countries in the grouping. Specific mention was also made that Malaysia underwent economic restructuring to ensure a more even distribution of wealth.

Prime Minister Harris picked up on this point and informed the Malaysian Ambassador that his Government of National Unity had been elected on a platform of income sharing and noted that among other matters the upcoming G-Summit would address income inequality. Possible areas of collaboration with Malaysia such as methods of addressing crime and illegal drugs were also discussed.

A group of university students, four from Yale and one from Harvard along with their chaperone Denise Quinlan then provided an opportunity for the Leader of the Federation to take a trip down memory lane.

Chaperone Quinlan and the students who are currently on Spring Break asked the Prime Minister questions ranging from when and why did he decide to go into politics, what were some of the strategies used in the most recent electoral campaign and what are some possible areas in which a study can be carried out in St. Kitts and Nevis.

The Prime Minister graciously answered, reminiscing about his days as a youth assisting his father who was an executive member of the St. Kitts and Nevis Trades and Labour Union and then being encouraged to campaign for elections while being a student.