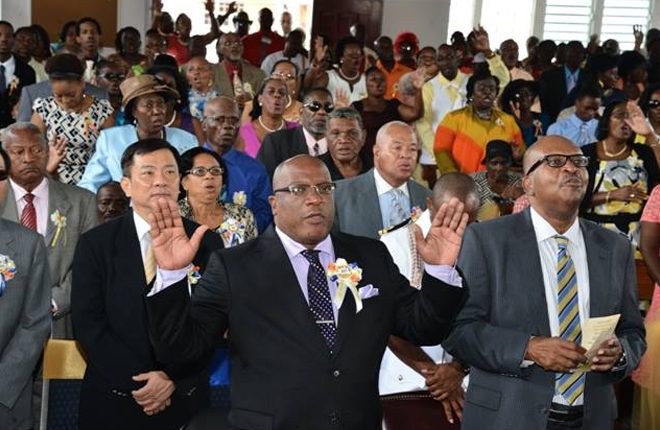 (PRESS SEC) – Prime Minister Dr. the Honourable Timothy Harris said today, Monday, September 11th, 2017, that the church community “has done a wonderful job in this our season of need, and we want the Church to go from strength to strength.”

Notably, the clergy, in collaboration with the Ministry of Ecclesiastical Affairs, issued a “Call to Prayer” for the Nation prior to the passage of Hurricane Irma. Dominion Radio 91.5 FM hosted the intercessory hour of prayer from 1:00pm to 2:00pm on Monday, September 4th, two days before Hurricane Irma made landfall.

Addressing citizens and residents last Monday night in a TV and radio simulcast, Prime Minister Harris described the call to prayer as a “well-needed initiative” and also commended the religious community for “the strong, demonstrative partnership role that it continues to play at this time.”

This morning, speaking with His Excellency Mr. Michael Powell on the Ambassador’s radio programme The People’s Voice on Sugar City 90.3 FM, the Prime Minister of St. Kitts and Nevis said: “We are a Nation under God and we want to give God the glory, the honour and the praise, and we understand the importance of the Deity in the context of our daily living.”

With this importance in mind, the Honourable Prime Minister asked the Ministry of Ecclesiastical Affairs to coordinate, in collaboration with the religious bodies in the Federation, a National Service of Praise and Thanksgiving to God –– for having spared the country from “the ravages of what could have been total devastation, given the magnitude of the hurricane,” as he stated last week.

Fifty pastors (25 on each island) from the Christian Council Churches, the Evangelical Churches and the Seventh-day Adventist Church are scheduled to officiate during five prayer segments tomorrow evening.

The segments in the concurrent service will focus on prayers for the Church, Social Order, the Nation, the Hurricane Season, as well as prayers of Thanksgiving and for the Blessing of the Federation.

Mr. Ron Dublin-Collins, Acting Permanent Secretary for Ecclesiastical Affairs, said today, Monday, in an interview with the Press Unit in the Office of the Prime Minister that, “Punctuating each segment will be congregational hymns and readings.” He added: “These readings – some five readings – will be done by young people from different congregations.”

Mr. Dublin-Collins further stated that, “We are also seeking to have the services broadcast on radio, so persons who really can’t make it out to a service can still listen and pray along in agreement with these various pastors who will be leading us in prayer.”