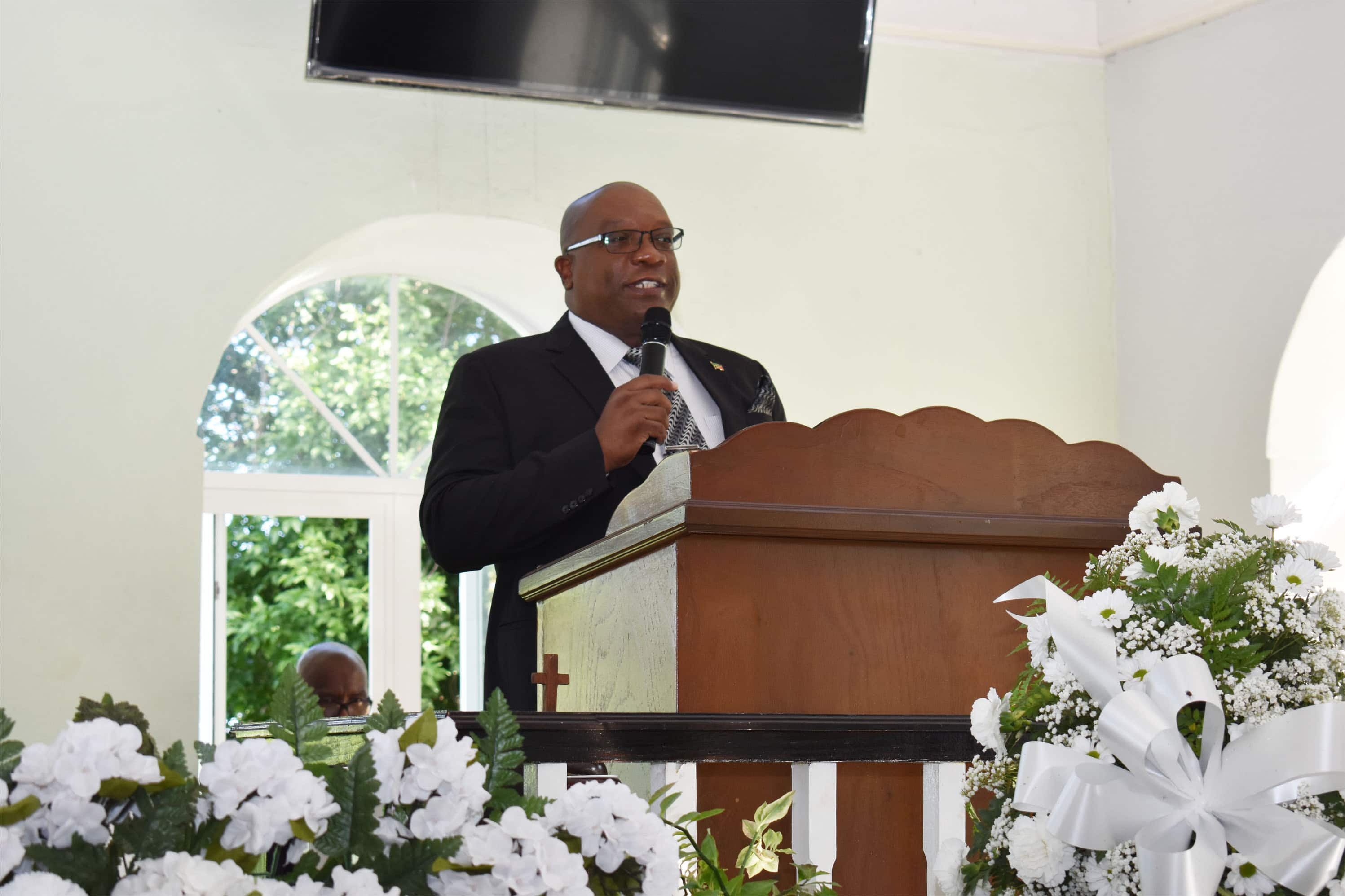 Basseterre, St. Kitts, December 22, 2021 (MMS-SKN) — The late Mr. Grant who was a well-established and well-known businessman in Cayon passed away on Monday, December 13. The thanksgiving service in celebration of his wonderful life was held at the Bethesda/New Dawn Moravian Church in Cayon.

Prime Minister Harris and Deputy Prime Minister Richards were due to attend the official opening ceremony of the Sandy Point National Security and Judicial Complex at the same time the funeral was taking place. The Prime Minister however told the family: “But we could not let this occasion pass without coming to extend the condolences of the government generally, and our own personal condolences to the Grant family.”

They had been welcomed to the church by the Master of Ceremonies, Mr. Cromwell Williams, a son of the late Mr. Grant, who is also the Manager of the Water Services Department. He informed those present that the two had a prearranged activity that they had to attend. The thanksgiving service was conducted by Rev Erwin R. R. Warner, and the sermon was delivered by Pastor Isilin V. Lewis.

According to the Prime Minister, he got to know about Mr. Grant as a fine businessman in the five years he spent in the Cayon community as he attended Cayon High School. He noted that it was at Grant’s Bar that in the afternoons the students would go to get their lunches, while bus drivers plying the Basseterre-Tabernacle route would stop there to get gas.

“Throughout my own acquaintance with him I have come to respect him as a gentleman, and a shrewd businessman,” observed Dr Harris. “He always gave fatherly advice, and so it was comforting from time to time to go there.”

Later on, in life, he met Mr. Grant’s wife Viola who was special to him as they forged a very strong bond. He said she was a businesswoman par excellence who had achieved what few women in St. Kitts and Nevis had achieved way back then, becoming the President of a major hotel. He pointed out that through thick and thin difficult periods that that operation had gone through, the only constant was the pace and the intervention of Mrs Viola Grant.

He said: “She has my deepest respect, not just as a wife, as a mother, but also as a business lady, and someone who in some very difficult period of my own life has always been there for me and later extended to some of my siblings including Her Honour Donna Harris, who is here, and my sister Her Honour Janine Harris-Lake, who is the Registrar. She adopted them as part of her extended family.”

Commenting further on his connections with the Grant family, the Honourable Prime Minister stated that when he was in search of a Press Secretary, it was Viola’s loving daughter Ms. Valencia Grant who came to the rescue. He noted she was a formidable force within the Office of the Prime Minister, producing like no other Press Secretary was able to produce.

“She (Valencia) was not just a Press Secretary, but disseminated things she was the creator and author of almost 99% that she would have produced on behalf of the Office of the Prime Minister,” said Prime Minister Harris. “So, I want you Valencia to know my prayers are with the family in general, but with you and Mrs Grant more almost particularly.”

The Prime Minister described Mr. Grant’s son, Mr. Cromwell Williams, as ‘my good countryman’ and offered condolences to him and his wife and family. He also said that another son, Mr. Chesley Hamilton, was his classmate at Cayon High School, concluding: “So, I have become entangled, if you will, in the entire family circle.”

The Prime Minister noted that in his final days Mr. Grant had been at the Grange Health Facility in Ottley’s where he not only had several opportunities to meet, to relax, to contemplate, to reflect on life and what he had done towards the family’s successful life, but he had an opportunity to weigh in and to weigh what was important.

“I would believe that ultimately like each of us must come, he had come to the point to understand and appreciate when all is said and done, only what is done for God really matters,” said Dr. Harris. “I hope that he took advantage of the opportunity to accept God, to accept His will so that when death would finally come, he was ready to say ‘death where is thy sting? I am going on now to glory’.”

Tributes at the thanksgiving service in celebration of Mr. Valentine James Grant’s life were made by his children including Ms. Valencia Grant who presented the eulogy and personal tribute which she capped with a special solo. Others were Mr. Cromwell Williams and daughter Ms. Dianne Hamilton. Scriptures were read by grandchildren Ms. Hannah-Marie Williams, and Mr. Zelmur James Hamilton. A choir made up of employees of the Ministry of Public Infrastructure paid tribute in song.