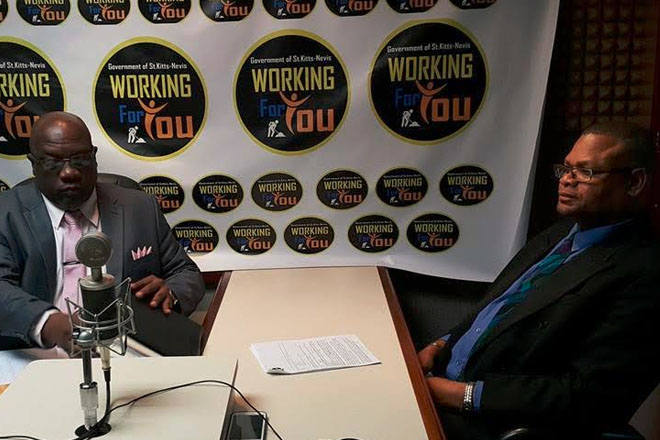 Basseterre, St. Kitts (SKNIS) — The challenges of electoral reform, proper management of the People’s Employment Program (PEP), the financial sector and restoring law and order in St. Kitts and Nevis are among the many pressing issues the Team Unity Administration has encountered upon taking office, said Prime Minister Dr. the Honourable Timothy Harris during his government’s debut weekly radio program “Working For You” which aired simultaneously Wednesday on three radio stations: ZIZ Radio, WINN FM and Sugar City Rock.

Dr. Harris said democracy was under threat due mainly to the confusion surrounding the electoral process of the last general election.

“…We went through an election and we went through, more importantly, Nomination Day, not knowing where the electoral boundaries were going to be. And the people in Cayon, like the people in Tabernacle, like the people elsewhere in the country were uncertain as to whom they were going to be voting for. It is the first time in our history and in the practice of democracy that any government had been is so callous as to reduce the country to that state of play,” Dr. Harris said of the previous administration.

Consequently, the prime minister noted that the critical part of good governance that needed addressing were constitutional and electoral system and electoral boundary reforms which are high on his government’s agenda.

The Prime Minister also pointed to law and order as another pressing issue his government has to address, considering the dismal record of the previous administration.

“Some may forget that by mid-February, we had already had seven homicides. Indeed the track record of the last administration would indicate that for the last seven years of the leadership of former Prime Minister Denzil Douglas, the country had become one of the murder capitals of the world,” Dr. Harris said.

The prime minister, who is also the national security minister, said since the implementation of his government’s six point plan, there has been a significant reduction in violent crimes in the country.

“Those were not reflecting monies for the ordinary people and that is why the ordinary people couldn’t get loans—they couldn’t access financing from the commercial banking system because they had nothing there on which they could rely to provide support to be able to execute loan financing…” Dr. Harris stated.

Regarding the poor management of PEP, Dr. Harris suggested this was reflective of the failure of the economy to grow, allowing more persons to be gainfully employed. He said the former prime minister had informed the International Monetary Fund (IMF) that PEP was a temporary program to address the depression in the economy.

“That program had over 3000 persons. Some of them graduates; some of them the best minds out of our college, who could find nothing but the minimum wage; and it was indeed a national tragedy that the leadership then in government could say to the graduate, could say to the student from the CFBC College that PEP was a blessing. Saying to people that the minimum standard of subsistence in the country was an adequate basis, an adequate platform to which they should aspire. We had a problem with that,” Dr. Harris argued.

“Working For You” will air live every Wednesday at 1:30pm through simulcasts on ZIZ, WinnFM, Sugar City Rock and rebroadcasts on Freedom FM on Thursdays at7:30-9:00am and on Von Radio on Thursdays from 10:30-12:00pm.