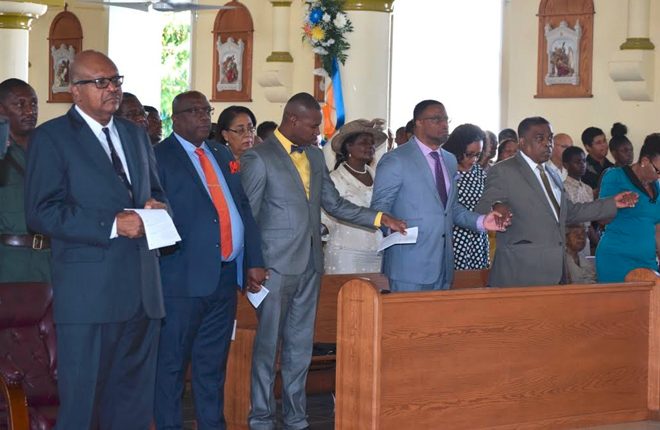 (SKNIS): During a church service to mark the commencement of the Government of National Unity week of activities in celebration of its second year anniversary in office, Prime Minister Dr. the Honourable Timothy Harris, paid homage to a number of persons for their unwavering support during his last two years of leadership.

One of these persons is His Excellency Sir Tapley Seaton, Governor General, who Prime Minister Harris described as someone who has played an integral part in his life since assuming office in February 2015.

“I must thank on behalf of the Cabinet, His Excellency Governor General, Sir Tapley Seaton, for gracing us with his presence and for me personally to say that under his tutelage I have heeded many wise counsel and I want to thank him for his support and I intend to be more regular at his knees seeking wise counsel and drawing upon his experience,” said Dr. Harris, while delivering remarks at the Co-Cathedral of Immaculate Conception in Basseterre on February 12, 2017. “As we commemorate our second anniversary I must acknowledge publicly that without the wise support, the regular and consistent availability of His Excellency, the successes which we lay a claim to could not have come.”

Equally important, Dr. Harris also recognized his Cabinet Colleagues and others for their tremendous contribution, not just to him, but also to the Federation of St. Kitts and Nevis.

“I thank all of the Cabinet colleagues for their support and for truly working as a team bringing our different skills, capacities and temperaments together in service to a country that we all love,” he said. “I want to say thank you to the senior officers of the government and our ambassadors – and we have both those who are in service directly to the Team Unity Administration, and those who are designated in service by their own governments to serve and report on the relationship between St. Kitts and Nevis and their country.”

Prime Minister Harris also used the occasion to recognize Sir Probyn, former Governor and Lady Innis, who joined in the celebrations. He also recognized citizens and residents, noting that the greatest thank you is extended them. “I want to say thank you and hope that what we were able to accomplish in your name to date has been satisfactory,” he said.