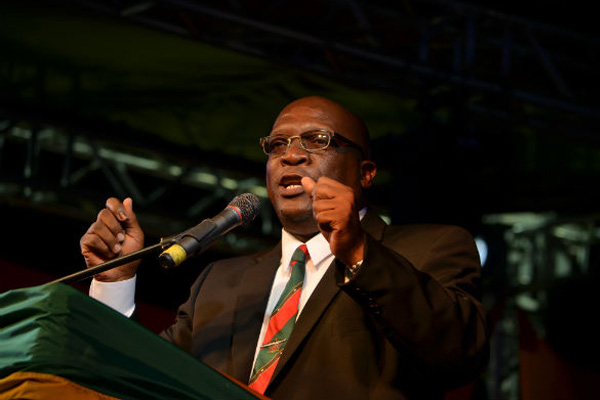 Basseterre, St. Kitts, February 23, 2015 (SKNIS): Prime Minister Dr. The Honourable Timothy Sylvester Harris took the opportunity during his public swearing-in ceremony on Sunday (February 22) to thank his friends and colleagues for their support but also to pledge a fresh start for the people of the Federation of St. Kitts and Nevis.

Assuring inclusion of people of all party affiliations, Prime Minister Harris stated that his team’s historic victory belongs to the people.

“We start today on a journey of new beginnings,” said Harris. “And I would certainly wish that it would be a new beginning for all of our people; for Labour people, for PAM people, for CCM people, for NRP people, even for NIP people and those who are not affiliated because certainly it is a historic journey and I recall that everywhere that we went throughout this campaign, we recognized the opportunity for us working together to make history on behalf of the people. Today’s celebration in my view is really the people’s celebration.”

Prime Minister Harris spoke to a common goal that Team Unity has pursued throughout the just concluded political campaign and which will be at the center of his administration’s governing agenda.

“We spoke with young people and we spoke with old people,” said Harris. We spoke with rich people. We spoke with our economic citizens. We spoke with the poor and needy. And we recognized wherever they stood, our people want the best for St. Kitts and Nevis and that was a common goal that should unite us always…. Everywhere I went from ghetto neighbourhoods to other neighbourhoods in Frigate Bay and Mattingley there was a common cry from all of our people: we deserve better than that which we have. And today I pledge that our team unity government will be different, will be better and we will work to be the best government for all the people of St. Kitts and Nevis.”

The new Prime Minister ended by pledging a brighter and more prosperous tomorrow for the people of the federation.

“I pledge that a new dawn has come for the young people of St. Kitts and Nevis and tomorrow is a new beginning of hope because Team Unity will ensure that prosperity will come to the people of St. Kitts and Nevis. …That is what this mission has been about. It has always been about you. Your needs, your wants, your dreams and how as a government we will not be a stumbling block to the legitimate expectations of our people but we will help to unleash your dreams, your vision, your imagination because it is from your dreams, your visions, your imagination that the greatness of our country can be built and constructed with the help of God. So I salute you and I thank you for giving my team a fresh start to make a difference in your lives.”