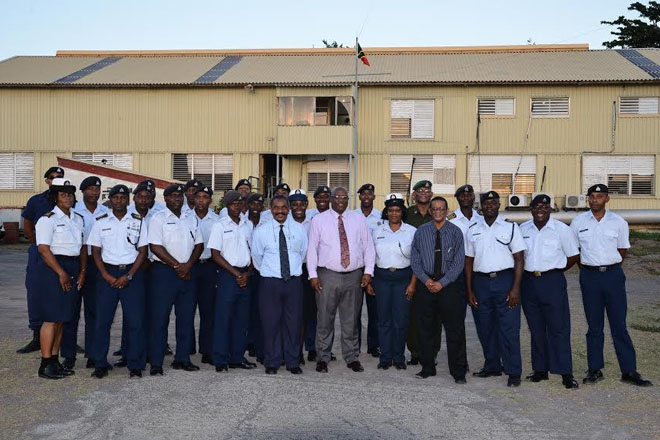 Basseterre, St. Kitts — Prime Minister and Minister of National Security, Dr. the Hon. Timothy Harris, promised relief and a “fresh start” for the men and women who serve in the St. Kitts and Nevis Defense Force (SKNDF) Coast Guard by giving serious attention and urgency to the improvement of their working conditions at Base Headquarters, Bird Rock.

The Prime Minister was at the time (last week) being taken on a tour of the Coast Guard Base by SKNDF Commander, Colonel Patrick Wallace and Coast Guard Commander Major Anthony Comrie, after a long question and answer session with members of the Defense Force.

Dr. Harris was taken aback by the horrid conditions under which our security forces have had to work and directed the Permanent Secretary in his Ministry of National Security, Mr. Osmond Petty, to address the matter urgently.

The Prime Minister had earlier been welcomed to the Base by Defense Force Commander, Colonel Patrick Wallace and Coast Guard Commander, Major Anthony Comrie. Major Comrie spoke of the Coast Guard as the first line in Defense and service of our country. He addressed the risks taken and dangers encountered in interdiction of illegal activities, search, rescue and other exercises carried out at sea by the disciplined and hard working men and women that he is so proud to lead. The Major also mentioned frequent voluntary work performed by the Coast Guard in serving and assisting community organizations and individuals by providing education and training in matters related to the sea and safety.

Major Comrie took the opportunity to speak on outstanding and important concerns with regard access to Coast Guard premises and the enduring poor living and working conditions. Other officers addressed the need for greater accountability and transparency, as well as a more enabling environment for career growth. They spoke candidly and passionately on a range of issues and concerns related to management, personnel, security, training and operations. A prominent issue was the unpleasant conditions in which they worked and lived. Some officers spoke ardently about health and environmental hazards including leaking sewage pipes, poor air circulation and extensive growth of fungi on walls and ceilings.

Dr. Harris thanked Major Comrie for the work being executed by the Coast Guard on behalf of the country. He said the meeting was an opportunity for him to assimilate the priorities and expectations of the Defense Force into the overall national plans and processes, “including the budgetary process”, so that government is better able to respond to their needs. He said, “your work of course is critically important and we came to office speaking to an agenda of prosperity and of course critical to that is the safety and security of our country…because no country can truly develop when there is war, when there is crime, when there is mayhem. And so we need an ordered society where people can go about their daily chores in an atmosphere that lends to their safety and their security.” He emphasised the role of the security forces in maintaining a stable society by saying, “this is where you come in, in collaboration with the police and other agencies of the security forces, in delivering law and order to our country.”

The Prime Minister acknowledged that government has a responsibility to ensure conditions of work are satisfactory and conducive to performance and productivity. He expressed gratitude and asked the Coast Guard members to take pride in their work and in the contribution they can and continue to make, as young people, to national development. “We are heartened that quite a number of young people have found the Coast Guard and working here to be a career path and we want that to be one that meets your expectations, both in terms of the work experience and the reward that allows you to fulfill your basic needs…raise your family…take care of yourself…those are all important under the rubric of prosperity for all.”

Prime Minister Harris’ visit to the Coast Guard followed a meeting a few hours earlier with members of the Defense Force Regiment at Camp Springfield, as part of a round of consultations with the critical agencies of the national security system.