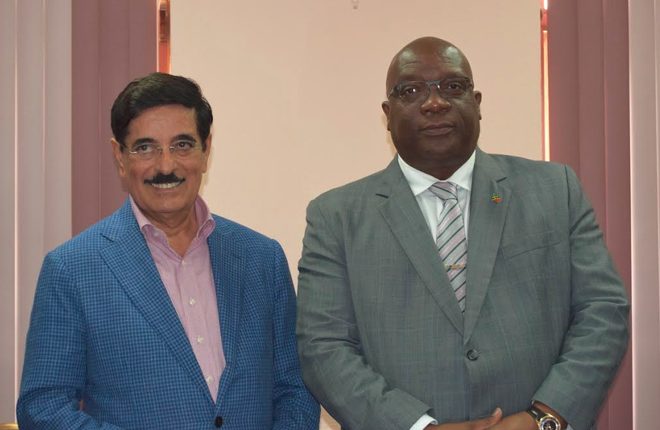 “We are very happy that you have kept your word to visit us, see how we live and learn a bit more first-hand about our country,” Prime Minister Harris told His Excellency Dr. Al-Kawari this afternoon at Government Headquarters.

His Excellency Dr. Al-Kawari said to Prime Minister Harris that, “Your visit to Qatar was very historic, and you met the Prime Minister and talked to him about the relationship between our two countries. I remember, too, that you met with our private sector…Today, I had a very important meeting with SKIPA [the St. Kitts Investment Promotion Agency] and they exposed the ideas that they have. I told them that they have to come to Qatar to promote St. Kitts to the Chamber of Commerce, to the Ministry of Economy there, the Qatar Investment Authority, etc., because we don’t know each other as much as we have to.”

Qatar, which is slightly smaller than the U.S. state of Connecticut, is ranked as the world’s richest country. In 1971, the world’s largest natural gas field was discovered off the coast of Qatar. Today, the country has the world’s largest natural gas reserves after Russia and Iran. Qatar has also diversified its economy in areas such as financial services, real estate investment and education. In 1998, for instance, the Qatari government built Education City, a major campus that supports six American and two European universities, as well as research centres and think tanks.

Prime Minister Dr. the Honourable Timothy Harris was accompanied on his trip to Qatar by His Excellency Dr. David Doyle, the Federation’s Ambassador to UNESCO based in Paris, and Mr. Justin Kareem Hawley, the Federation’s Consul General in Dubai.

Present at today’s meeting in Basseterre were Senator and Minister of State within the Ministry of Health, Community Development, Gender Affairs and Social Services, the Honourable Wendy Phipps; Cabinet Secretary, Mrs. Josephine Huggins, Permanent Secretary in the Office of the Prime Minister, Mr. Andrew Skerritt, and Secretary General of the National Commission for UNESCO, Mr. Antonio Maynard.