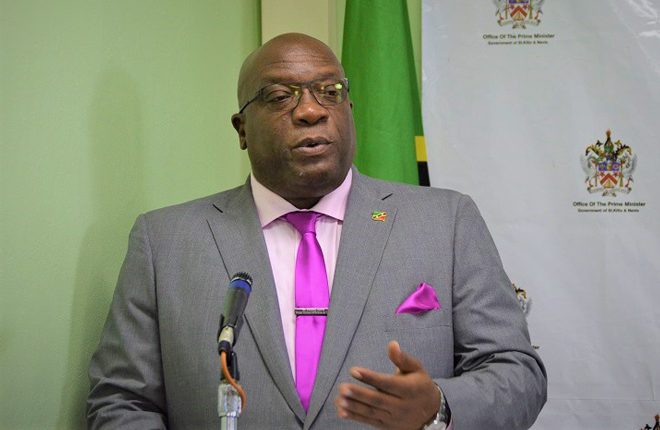 (SKNIS): Prime Minister, Dr. the Honourable Timothy Harris, while addressing the nation at his monthly press conference held on April 25, gave an update on key developmental projects that are happening in the federation.

Prime Minister Harris announced that the opening of the new Police Forensic Lab is slated for this Friday, April 27, at the Tabernacle Police Station. He added that this lab will be a major boost to the capacity and capability to better enhance public safety and security.

He also added that the construction of the new Public Works Department is almost completed and the vehicle maintenance division is expected to be open and operational from the St. Kitts Sugar Manufacturing Corporation (SSMC) site as of May 01, 2018.

The construction of the New Coast Guard base “continues to make strong progress,” expressed the Prime Minister. The contractor is Sheldon Hamilton of Hammy’s Construction

The Prime Minister also lauded the work being done at the Tabernacle Health Center and said that the project is on stream to be completed on time and on budget. The construction of the centre began in November 2017 with an expected date of 14 months for completion.

He said that a public tender will be published during the second week of May for the rehabilitation of the Old Road Bay. Following the petition of bids, the actual construction of the bay is estimated to begin in early 2019.

Additionally, Prime Minister Harris said that the “National Heroes Park is getting lovelier as the build out continues apace.”

“Such a diversified portfolio of quality projects is being undertaken that will impact on the quality of life of our people for the better. The work of Team Unity is there for even the blind to see. We are working; we are delivering and our victory is assured,” expressed Prime Minister Harris.