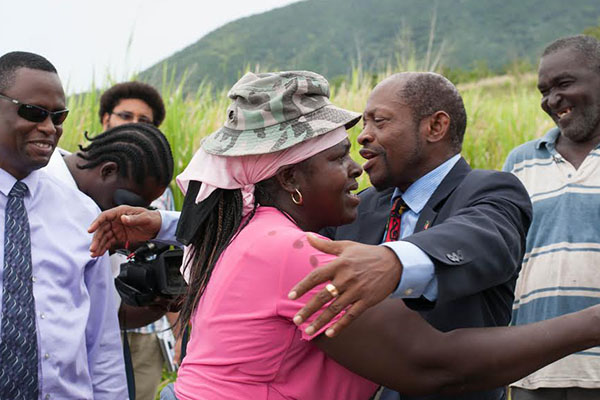 PM Lends an Ear to Farmers in Ogee’s

The visit was part of the Prime Minister’s island-wide tour to listen to views and concerns and learn more about developments in various sectors. While there, he responded to issues such as water shortages and the loss of produce due to a lack of post-harvest alternatives for surplus that does not get sold. Prime Minister Douglas pledged his support for farmers in the area, noting that a special water development programme is expected to begin soon. He agreed to suggest the Water Services Department drill an experimental well in the area so farmers can get access to water. He also mentioned the importance of developing a relationship with the Agro-processing Unit so produce can be processed into different by-products.

One farmer said that there is unfair distribution of state assistance resulting in a marketing imbalance where larger farmers are allowed to monopolize on certain crops. Minister of Agriculture Hon. Nigel Carty, who was also present, said that there is need for more collaborative efforts and a disciplined strategy, in which farmers possibly alternate crops, which would help to ensure more even market-share.

“There should be more coordination in the overall marketing strategy so that there is better distribution,” he said. “We try to assist everyone but it’s important that larger farmers don’t get to monopolize and dominate the market.”

Community activist Dr Terrance Drew said that he is happy that the Prime Minister and Minister Carty made the visit. “We’ve been having these issues for a long time, especially with the water supply, so it’s important that residents are able to speak directly to the people who can assist them,” he said. “I envision that this area will become a major production zone in the agricultural sector so this is a big step and I’m glad both gentlemen were here to listen to these concerns.”

A number of these farmers are currently participating in a special food security project called the Farm to Fork Model, funded by CARICOM, which focuses on alternative farming models, such as shade housing and drip irrigation.