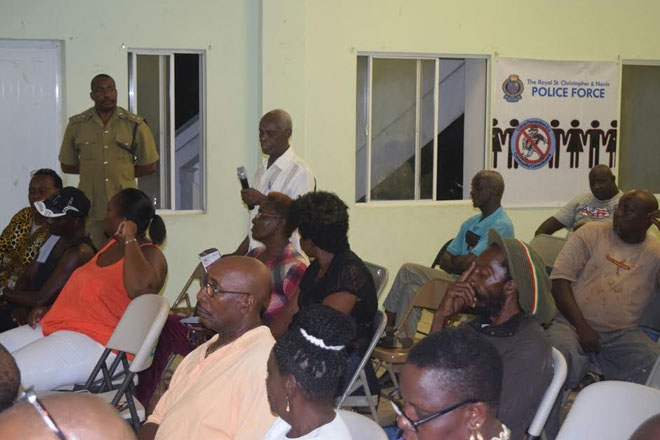 Police and Cayon Community engage in Dialogue on Crime

“We appeal to the community to help, so therefore cooperation and dialogue is critical and that is why we are here tonight,” said Acting Commissioner Stafford Liburd. Commissioner Liburd publicly commended the officers of the Cayon Police Station for their efforts.

The implementation and successes so far with regards to the “Six Point Plan” was outlined by Assistant Commissioner of Police with responsibility for Operations Vaughan Henderson. “The increased patrols by both the Police and Defence Force that you’re seeing are a part of plan, the stop and searches are part of the plan, and the other increased activity that you witness in your area is a part of the plan. This engagement tonight is also a part of the plan, and it sends a strong message to the criminals that you are fed up and want to restore Cayon to its glory.” The ACP also challenged the residents to continue to partner with the Police for the benefit of Cayon and the Nation.

“Over the last years, the statistics have shown a downward trend in crime, the period of January to September 2015, when compared to the same period last year, there has been a 23.5 percent reduction in crime. In the month of September 2015 there has been a 25.7 percent decrease when compared to last year,” said ACP Queeley. He added, “Overall crime is down, however homicides and violent crime continues to be major concern for the Police Force. It is troubling for us, and has caused us to develop a plan of action to address crime and the fear of crime.”

To win the fight against crime, “we must be partners, we want you to be a part of this effort,” ACP Queeley told the audience, and said the Force welcomes their suggestions.

Homicides and activity surrounding illegal drugs were the hot topics when residents were given the opportunity to voice their concerns. Residents pointed out that engagement of all would be critical to stemming crime in their community and called on community groups, churches and other organizations to do their part. Parents were challenged and encouraged by the audience to become more active and live up to their responsibility as parents.

Despite voicing a few criticisms that were embraced by the High Command with a promise of resolution, area residents also had praise for the officers of the Cayon Police Station, and said they appreciated the work of the officers there. In particular they commended Sgt Greaux, Officer in charge of the Cayon Police District, where one resident said, and “is always out and about in the community.”

Prime Minister Dr. the Honourable Timothy Harris was also in attendance and gave brief remarks where he told the community to expect the best from the Officers in their station, “hold them accountable for good service,” he said.

Just before closing the meeting, the High Command reiterated to the audience that the fight against crime will take all of us, street by street, schools, organizations, churches and communities to assist in keeping our young people away from criminal activity.

ACP Queeley also used the moment to echo “if you see you something, if you know something, if you hear something with regards to crime and criminal activity, tell someone. Call the nearest Police Station or call Crime Stoppers at 1-800-8477 (TIPS).

The first townhall meeting was held in Sandy Point in August. Other meetings will be scheduled throughout the Federation in the coming months.