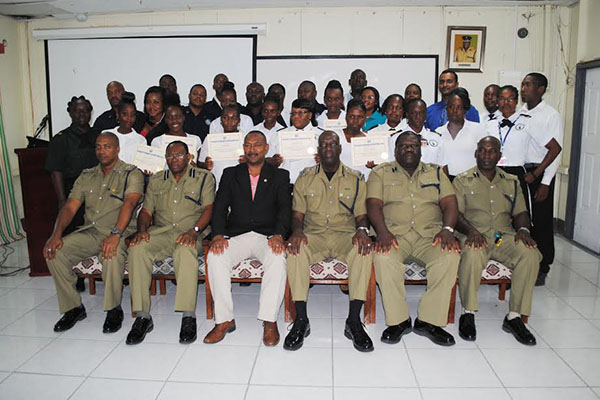 Basseterre, St. Kitts — The Federation of St. Kitts and Nevis Friday April 11 welcomed 29 men and women who received the rights and privileges of becoming Royal St. Christopher and Nevis Police Officers under the office of the Island Constable Programme after a three-week course at the Police Training Complex in Basseterre.

In welcoming them at the graduation ceremony of Island Constable Course No. 1/2014, Commissioner of Police Dr Celvin G. Walwyn advised them that whenever they take police action they would be doing so under the auspices of the Royal St. Christopher and Nevis Police Force.

“What that simply means is that you will be held accountable for your actions by the standards of the Royal St. Christopher and Nevis Police Force,” noted the Commissioner of Police. “We have a use of force policy.”

He informed them that as police officers they have the authority to limit a person’s freedom. However when they choose to make that decision they must be within the law and the only way to be within the law is to read (the laws).

“We will not support you in violating anybody’s civil rights,” stated Dr Walwyn. “With responsibility comes accountability.  The Royal St. Christopher and Nevis Police Force will support you a hundred percent when you are right. If you are 99 percent correct we will investigate and if that one percent puts you behind bars – it will.”

According to Commissioner Walwyn, the graduating class was the fifth in the three-year old Island Constable Programme that was started by his predecessor, Commissioner Austin Williams.

He noted it was done with the support of the staff of the Police Training Complex under its Commandant Supt Lionel Moore. He also mentioned Supt Cromwell Henry, Commandant Police District B, who was present.

“I also want to acknowledge Mr Geoffrey Hanley, Project Manager of the People Employment Programme (PEP),” observed Commissioner Walwyn. “When I brought up the suggestion to him, he did not hesitate.

“He said, ‘whatever you want we will make it happen’. I want to thank you (Mr Hanley, who was present) especially before I go any further in today’s ceremony because without you it would not have happened.”

Master of Ceremony at the colourful event, which was also attended by officials from the organisations represented and friends and relatives, was Inspector Lyndon David, Police Public Relations Officer.

Welcome Address was delivered by Supt Lionel Moore, Commandant, Police Training School who in welcoming them into the fold of the Police Force advised them that in the near future they will be handed the presets of the Governor General giving them the authority and all the powers of Island Constable and also the powers as police officers who will assist in providing the security and safety to visitors and residents alike.

He advised that the course participants were given a written assignment in which twenty seven participants were successful in meeting the required passing grade for the written assessment and “I must acknowledge the Ross Security Officer Ms Alicia Liddie who would have emerged with 96 percent pass of the assessment.”

In giving brief remarks, Assistant Commissioner of Police (Crime) Mr Ian Queeley praised the participants for enduring the hardships of learning, the result of which is that they were now equipped with police powers.

He had a special word for the PEP Tourist Patrol Officers: “I beseech you to be more than professional, because the image that you portray can be lasting. A number of times you may be the first face or even the point of contact that cruise passengers come into contact with and so the impression you give at that point and time will be very important.

“Make sure you operate with your professionalism that is required.”