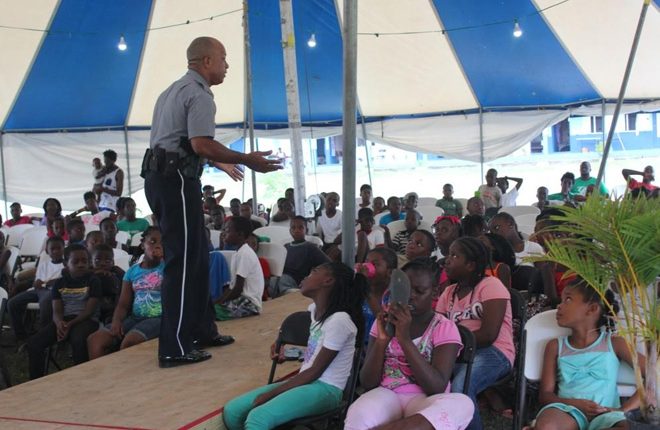 (SKNIS): Organizers of the Police Summer Camp has welcomed the excitement surrounding the inaugural activity and the eagerness of participants to attend the August 14 to 27 camp, noting that it will help to bridge the gap between law enforcement officers and the youth in particular.

Constable Lauston Percival is taking the lead in this initiative and said the response has been overwhelming from persons throughout the country.

“When the word got out and the registration forms were sent to the police stations, they went real, real quick,” he said, adding that the original number targeted was 150 children between the age of 5 and 16. “After the 150 forms went so fast and people were still calling I got the go ahead to do an extra 50. … People are seeing something new; people are seeing the police in a different light so they are eager to get their children involved in something that the police are doing.”

Constable Percival expressed his belief that engaging adults through their children is an effective way to advance pointed messages and broad themes.

A variety of topics will be shared with the children including sexual abuse and peer pressure by officers from the Special Victims’ Unit, presentations by senior prison officials and also residents of Her Majesty’s Prison, road safety, children rights, illegal drugs and riot demonstration. The riot drill is designed to capture the campers’ imagination and showcase the ability of the men and women of the Royal St. Christopher and Nevis Police Force (RSCNPF) to maintain control under extreme circumstances.

Movie screenings, picnics, field trips, a sports day, a boat ride to Nevis to tour the historic capital of Charlestown, and a career fair are also planned for the Police Summer Camp. Job opportunities in the Police Force, Defence Force, Fire Department, Emergency Medical Services, and a number of private companies will be on display at the fair along with the various tools that are used on the job.

“We want to expose the children to some of the things that the police do,” Constable Percival stated. “These little ones that we are nurturing right now [they] are going to be the future – the police officers, nurses, doctors – these are the ones that we have to nurture and bring up in the right way.”

The police constable credited the permanent secretary in the Ministry of National Security, Osmond Petty for the support he has given to this new initiative. He also thanked a number of private companies and individuals that contributed to the camp as well as to the parents for the confidence that they repose in the men and women of law enforcement.