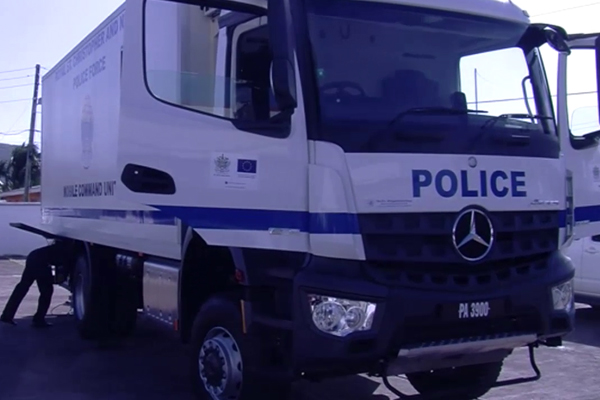 (ZIZ News) — The Royal St. Christopher and Nevis Police Force is now prepared to take its crime fighting and crime prevention initiatives on the road, this with the donation of a Mobile Command Unit.

On Wednesday morning, Prime Minister, the Right Hon. Dr. Denzil Douglas; Permanent Secretary in the Anti-Crime Unit Her Excellency Astona Browne; and Commissioner of Police Dr. Celvin Walwyn were among the dignitaries who witnessed the handing over ceremony of the a Mobile Command Unit, together with 10 Luxgen model vehicles for the Royal St. Christopher And Nevis Police Force.

The ceremony commenced at 10am and was held at the Police Training Complex in Basseterre.

While addressing the gathering, Her Excellency Astona Browne, Permanent Secretary in the Anti-Crime Unit, spoke of the many initiatives the government had taken to ensure that the police are equipped with the necessary tools to fight and prevent crime.

“From January 1st to the last day in December, the government of St. Kitts-Nevis, through the Anti-Crime Unit and the Ministry Of Homeland Security, has been supplying the resources necessary to enhance the capabilities of the officers who are charged with the responsibility of keeping the Federation safe. Our officers have the capacity to apply modern technology in detecting criminal activities,” she said.

Browne said police officers have also benefitted from training in various areas of law enforcement. She added that the training has proven to be quite effective.

“Crime scene officers have been benefiting throughout the year from training in the processing of crime scene, the management of crime scenes, responding to the criminal activities and they too have had the benefit of training in prosecution,” she said.

“We have, in a few days, in the early part of 2015, training programmes lined up with the assistance of judges and senior lawyers from the United Kingdom who will be working closely with the Office of the Director of Public Prosecution and our police prosecutors to ensure that they are equipped with the skills necessary to improve their operation in that area,” she said.