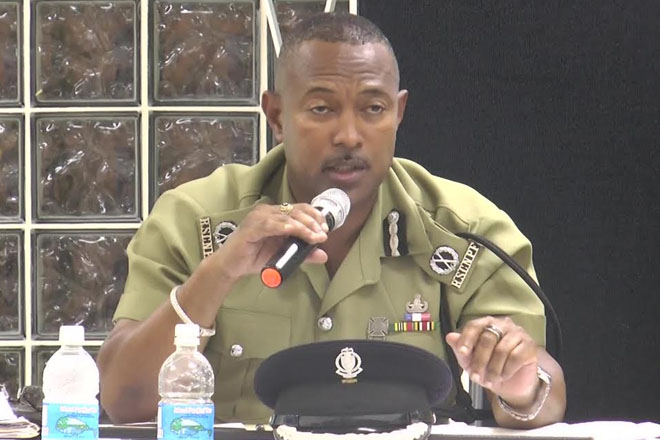 (ZIZ New) — Residents of Sandy Point weighed in on the country’s current level of safety and security when they were invited to a town hall meeting at the Sandy Point Community Centre.

Held on Thursday night, the town hall saw members of the Royal St. Christopher and Nevis Police Force engage the audience on their Six Point Plan of Action to reduce crime over the next three years.

Assistant Commissioner of Police for Crime, Ian Queeley said many of the crimes within the Federation, particularly within Division B, which stretches from Ross University to Lodge, are linked to marijuana use.

“We can debate all night about the properties within the herb and what is good and what is bad…our information also suggests that a number of the shootings in other areas in the Federation are directly linked to the importation and trafficking of marijuana and other drugs,” he added.

Another hot topic at Thursday night’s Town Hall was the expunction of criminal records.

“For non-custodial sentence, that is if you go to court and you’re fined and that conviction is recorded against you, the law says that within three years, that sentence can be expunged. If you’re sentenced to prison and it’s not exceeding six months, so one day to six months, after a period of five years, that can be expunged. If the sentence is six months or more but not exceeding 18 months, it takes eight years. That record remains with you for eight years. If this sentence of imprisonment exceeds 18 months but not exceeding three years, it takes 10 years for that to be expunged,” he said.