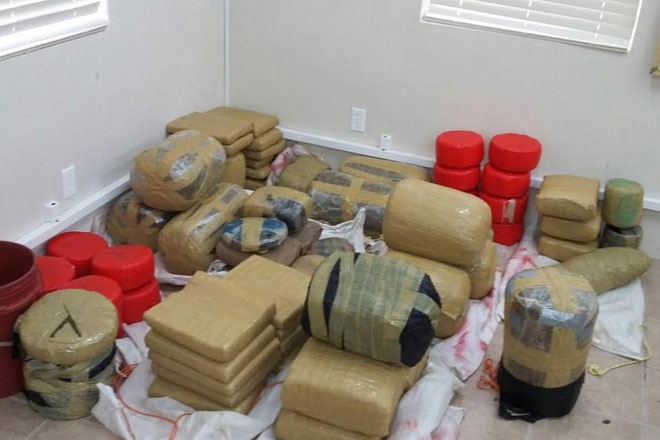 (ZIZ News) — Several units within the Royal St. Christopher and Nevis Police Force have come in for high praise from Assistant Commissioner of Police, Ian Queeley following Friday’s drug bust on Nevis, which led to the arrest of a young mother, Patricesia James, who, according to the police, has been charged with illegal possession and possession with intent to supply, after 517 pounds of compressed marijuana was found at her home in Cherry Garden.

During an exclusive interview with ZIZ News, ACP Queeley said, “Kudos to the units involved in this operation. It’s a clear demonstration that hard work pays and the officers of the St. Kitts and Nevis Police Force and in particular, the SSU, Drug Squad and Task Force are to be highly commended.”

ACP Queeley added that the police force had been busy executing aspects of its Six Point Plan of Action.

“Over the past week or so, we have seen two significant operations which, by the way, is in no small measure, reiterating some of the points that we have laid out in our Six Point Plan of Action which actually shows that our Intelligence-led Policing and targeted operations can bear fruits and the fruits are here for you to see,” he explained.

Sergeant Carlene Phipps, who was instrumental in the operation, gave an overview of the exercise, noting that at approximately 12:20pm, the police “executed a search warrant on a premises in Nevis of Patricesia James where a large quantity of marijuana was found.”

Sgt. Phipps said James “was later charged and the drug estimated to be EC$7.75million.”