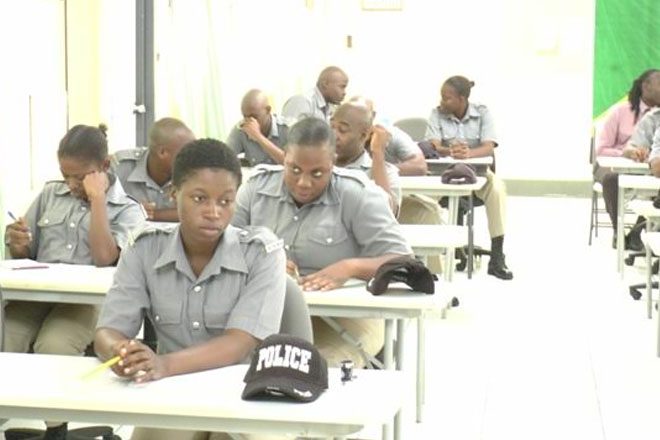 The recruits were well attired in grey shirts, beige trousers, black belts and black shoes when the public, via the media, got its first official look at the 21 males and 11 females who are undertaking six months of intense training with hopes of becoming police officers.

The Force’s top officials offered words of advice to the recruits with Govia speaking on the importance of always doing what is right.

“Make the commitment now that no one can compromise you, even as a recruit. And so, if that person didn’t study, let them prepare to fail and we also want men who, in their inner most souls, are honest and true. Just as importantly, we want you to stand for right which is very important,” Govia said.

Deputy Commandant of the Police Training School, Inspector Eldrin Dickenson is among the instructors. He too had words of advice for the recruits.

“You must therefore pray every day as the time comes to the end. You must have a vision as to where you want to go from here having successfully completed your training. You need to listen attentively and constructively to instructions because it is important. You must show your other colleagues here on this course that you care about their needs,” Dickenson noted.