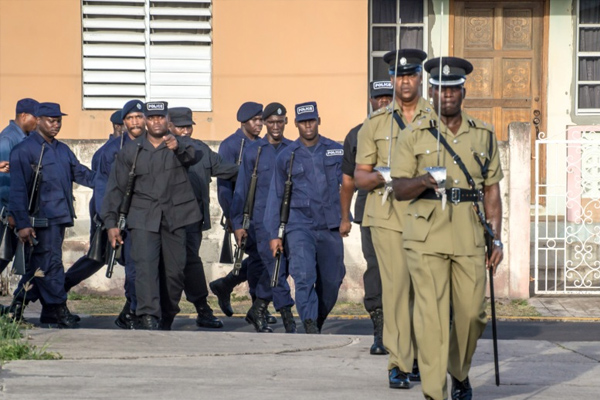 Basseterre, St. Kitts (SKNIS): Members of the Royal St. Christopher and Nevis Police Force marched through the streets of the capital, Basseterre on Wednesday (June 11) in an exercise designed to maintain discipline in the ranks and strengthen public confidence.

Commissioner of Police Celvin G. Walwyn, flanked by Deputy Commissioner Stafford Liburd, Superintendant Lionel Moore and other gazetted members, took the salute on the Bay Road as officers from tactical units and other divisions participated in the Commissioner’s Parade and Route March. The parade concluded at the Police Training Complex, where Commissioner Walwyn thanked the men and women for their service.

“The hard work you have been doing over the time I have been here has reduced crime by 40.8 percent over the last three years in the month of May,” he stated. “The [statistics] for May for this year compared to last year is down 47.5 percent. It means that you are out there doing your job and for that I thank you, I appreciate it.”

Members of the police band, made up primarily of volunteer high school students, were also praised for their performance on the route march and the dedication they continue to show. The head of the police explained that the event reinforced the Force’s commitment to the public.

“The history of this police force has been … very people oriented and the public looks up to the police when they are marching through the streets,” Walwyn disclosed. “It is also expected that the police will be there when the people call and this [march] was very important so they can see the police is ready … and it just builds pride.”

A Commissioner’s Parade and Route March through Charlestown, Nevis is scheduled for Tuesday, June 17.