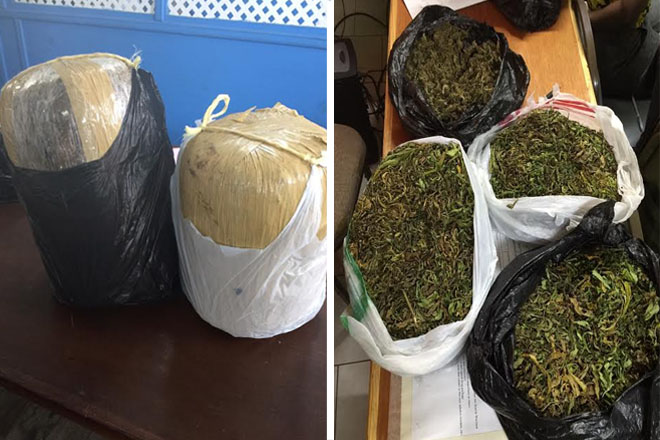 (ZIZ News) — Searches conducted by members of the security forces, on Saturday, have resulted in nearly half million dollars worth of illegal drugs being seized and the arrest of four individuals.

A release from the Public Relations Department of the Police Force states that the search operations were carried out at the Southeast Peninsula and along the Bay Road.

It went on to say that a search of motorbus TA 209, owned and driven by Akimba Demming of New Pond Site, resulted in the find of 13.5 kilograms of compressed marijuana with an estimated street value of $450 thousand.

Demming, along with Roy Wilkerson who was the other occupant of the bus, were taken into police custody.

That operation was carried out in the Timothy Hill area at 12:30pm.

Meanwhile, Dexter Somersall of Prickle Pear Alley is now in custody after being found in possession of 6.4 grams of cocaine in the vicinity of the Bus Terminal on the Bay Road.

A search warrant was then executed on a property in Shadwell Housing where Somersall resides, resulting in the seizure of another 762 grams of marijuana with an estimated street value of more than $45, thousand.

Somersall and Xenia Collins, who was present at the property, were taken into custody.

The police release added that charges are likely to be filed against all four individuals.