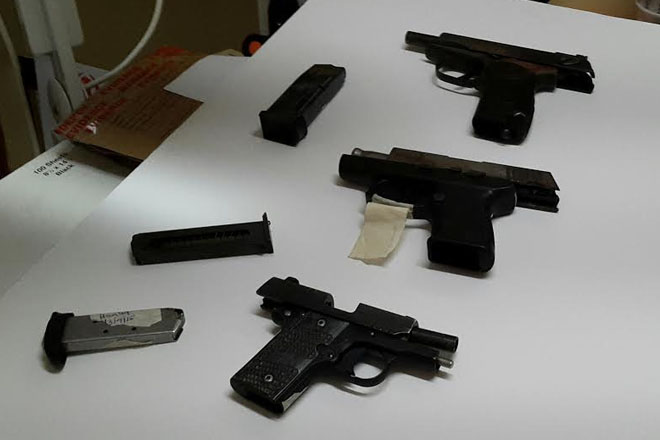 Basseterre, St. Kitts (RSCNPF) — Four months after the adoption of the ‘Six Point Plan’ to reduce homicides and violent crimes in St. Kitts and Nevis, The Royal St. Christopher and Nevis Police Force has seen considerable success in the removal of illegal firearms from the streets.

Police have seized 15 illegal firearms in the Federation so far this year, with eight occurring since the implementation of the plan.

ACP Henderson, also noted, “Our partnership with Her Majesties Customs and Excise Service and the St. Kitts Nevis Defence Force and our improved relationship with the public have also played a significant role.” The ACP also stated that a number of persons have been arrested and charged in relation to seizure of these illegal firearms.

“Illegal firearms continue to pose a significant threat to our efforts to reduce homicides and violent crimes and it is still the weapon of choice for criminals who want to commit such crimes. That is why I say the seizure of 15 illegal firearms to date is more than encouraging when compared to a total of 12 illegal firearms that were taken of the street by Police in 2014. With continued training in the area of firearms tool marking and ballistics, as well as collaboration with regional and international partners and stakeholders, our officers are expected to yield even greater success in the coming months. Our Officers are doing a great job and I applaud them for their duty and dedication,” said Acting Commissioner of Police Stafford Liburd.

The removal of illegal firearms from the streets is one of the performance goals outlined in the Royal St. Christopher and Nevis Police Force’s Six Point Plan to reduce homicides and violent crimes in St. Kitts and Nevis.