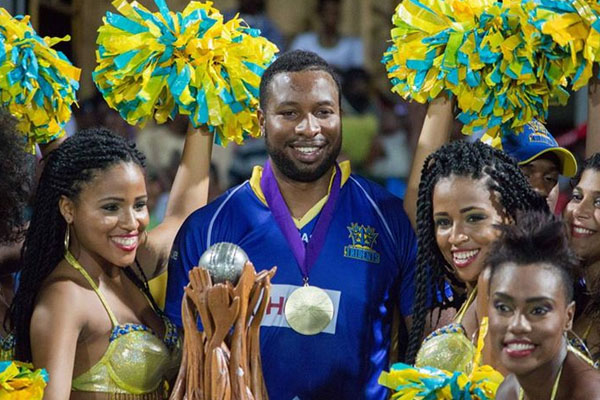 ZIZ News — The Barbados Tridents team has gone down in history as the winner of the Second Limacol Caribbean Premier League Tournament.

The anticlimactic end to the tournament however, caught both fans and players off guard.

When the decision was made to end the match under the Duckworth/Lewis Method, the Barbados players ran across the field in excitement.

The Amazon Warriors on the other hand felt robbed of the chance to successfully chase down the target and as a result boycotted the trophy presentation ceremony.

The final’s match referee explained the decision which had left so many fans disappointed.

“Based on the playing conditions, the one hundred and sixty minutes allotted for the game would have expired in addition to the extra time of an hour. So after the rain and the guys tried to pull the covers, as best as possible, the time for the games would’ve elapsed. So as a result Barbados would’ve won the game by the Duckworth/ Lewis method,” he said.

Captain of the Barbados Tridents, Kieron Pollard, said he was disappointed by the lack of sportsmanship exhibited by some of the Guyana Amazon Warriors.

“At the end of the day, as a matter of playing within rules and regulations, throughout the tournament we’ve been playing within rules and regulations,” he said. “And if there’s a situation where you need to get fined because of rules and regulations, you get fined. So at the end of the day it’s cricket. We’ve all played a lot of cricket. Both teams have played a lot of international cricket to know what the rule is and what the regulations are. So for me it’s about that. We play within the rules and regulations and if this is how we have to win we’ll take it like that…sorry ending. But if it were on the other foot, at the end of the day we’d have taken it just the same. We would’ve been disappointed but taken it in stride. I’m very disappointed to see Guyana coming out there today. I’m very, very disappointed. You know, West Indies cricketers in that dressing room as well. All of us in the Caribbean we are cricketers, we are here to represent. In two or three days time we’re gonna play as a West Indies team and we’re gonna play as teammates so it was very disappointing for us but that being said we’re gonna take the win. We’re the champions and we’re gonna go to Champions League.”

This is the second year the Guyana Amazon Warriors made it to the CPL Final. In their first appearance, they were defeated by the Jamaica Tallawahs.