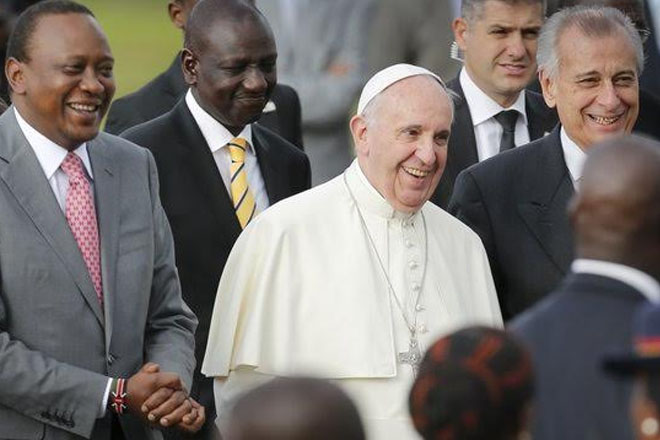 Pope Francis in Kenya at start of African tour

(BBC) Pope Francis has arrived in Kenya for a three-nation African tour – his first to the continent as pontiff.

President Uhuru Kenyatta and ululating crowds welcomed him at the airport in the capital, Nairobi.

The pope called for peace, saying conflict and terrorism “feed on fear, mistrust, and the despair born of poverty and frustration”.

A leading Muslim cleric in Kenya welcomed the visit, saying it gave hope to the “downtrodden in the slums”.

An atheist group said it would challenge in court a government decision to declare Thursday a holiday in honour of the pontiff.

Pope Francis’s five-day visit will also see him go to Uganda and Central African Republic, which has been hit by Christian-Muslim conflict.

Kenya’s government has said that up to 10,000 police officers may be deployed during the visit.

Militant Islamists have carried out a spate of attacks in Kenya – including the 2013 siege at Nairobi’s Westgate shopping centre, which left at least 67 dead, and the killing of about 150 people during an assault on the Garissa National University College in April this year.

“All men and women of goodwill are called to work for reconciliation and peace, forgiveness and healing,” Pope Francis said at a function hosted by President Kenyatta in State House.

He made a veiled reference to corruption by calling on leaders to work with integrity and transparency, says the BBC’s Joseph Odhiambo in Nairobi.

President Kenyatta called on the Pope to pray that Kenya succeeds in its fight against corruption.

On Wednesday, he sacked six ministers following allegations of corruption in the government. The six have denied the allegations.

About 30% of Kenyans – including President Kenyatta – are baptised Catholics, and there is huge excitement around the visit, our correspondent says.

Crowds lined the streets of Nairobi to catch a glimpse of the pope as he was driven in a grey Honda saloon to Mr Kenyatta’s office for his official engagement.

One of Kenya’s main newspapers, The Standard, welcomed him with headlines in Latin, Grata Franciscus Pontifex, and the regional Swahili language, Karibu Papa Francis.

The Pope is expected to tackle corruption, poverty and religious conflict during his five-day visit.