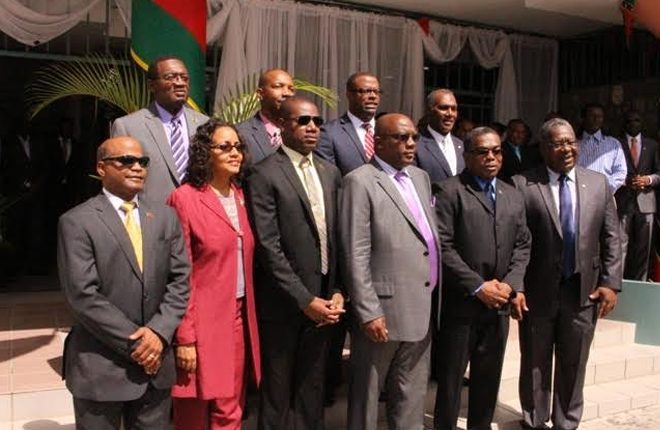 2. Cabinet discussed matters surrounding a delimitation agreement between St. Kitts and Nevis and the Netherlands regarding Sint Eustatius. Sint Eustatius is a tiny Dutch island in the West Indies. It is a special municipality of the Netherlands. The island lies in the Northern Leeward Islands, southeast of the Virgin Islands, immediately northwest of Saint Kitts and southeast of Saba. The regional capital is Oranjestad and the island has an area of eight (8) square miles.

3. Cabinet discussed the major outcomes of the 2017 Budget Estimates Meeting. Cabinet is satisfied that the Budget sets an appropriate framework for the delivery of government’s programmes. Cabinet examined the proposed medium-term fiscal framework for the three year period (2017-2019) and noted that a Surplus Budget should be derived and sustained economic growth will be derived over the said period. In this regard, Cabinet recorded its appreciation to all government ministries for their involvement and cooperation over the three-day planning period from October 12-14, 2016.

4. Cabinet approved applications for Alien Land holding Licenses. The obtaining of an Alien Land Holding License is governed by the Aliens Land Holding Regulation Act, Chapter 10.01, of the Laws of Saint Christopher and Nevis. The Act is to make provisions for aliens to obtain licenses in order to hold land or mortgages on land etc.; and to provide for related or incidental matters.

6. Cabinet approved the establishment of the Saint Kitts and Nevis Probation and Child Welfare Board in keeping with St. Kitts and Nevis’ commitments under the United Nations Convention on the Rights of the Child in ensuring adequate care and protection of our Nation’s children. The St Kitts-Nevis Probation and Child Welfare Board will be comprised of between seven and twelve members with the responsibilities of providing and maintaining Child Care Centers for children in need of care and protection; providing counselling and other services for children in need of care and protection and to parents and guardians of those children; placing children in Foster Care and supervising Foster Homes; receiving reports of all cases and suspected cases of child abuse, investigating such reports and other appropriate reports such as cases to the Attorney General, the Commissioner of Police and the Director of Public Prosecutions (DPP). The Board, now constituted, under an amendment of 2013, is also responsible for appointing both the Adoption Committee and the Child Justice Committee, which are integral to the full implementation of the Child Justice Act, which calls for diversion and a number of other alternative sentences. The history of the Board has been punctuated with several periods of inactivity which have severely hampered both the Juvenile Justice System and the protection of vulnerable children. Since 2015, the Department of Probation and Child Protection Services has been unable to fully function as it is the Board and not the Department that has the authority to take matters to court or remove children from homes in cases of abuse and neglect.

7. Cabinet approved a number of recommendations relating to the Citizenship by Investment (CBI) Programme. These recommendations include an Accelerated Application Process; a review of legislation and regulations, including consideration of a broader pool of initiatives for consideration under the CBI Programme. The Citizenship by Investment Unit (CIU) is the Government Authority which handles all matters concerning Citizenship by Investment in the Federation of St. Kitts and Nevis. The Citizenship by Investment Programme was established in 1984, making it the longest established programme of its kind in the world. It has distinguished itself from many other similar programmes by rigidly enforced investment requirements and meticulous due diligence procedures. The Government of St. Kitts and Nevis utilizes this programme to attract investors of good character to make a substantial contribution to the development of the Federation. These investors are then given the opportunity to apply for citizenship and passport within the strict guidelines of the law and the relevant regulations.

8. Cabinet received an update from the technical team of the Ministry of National Security comprising Deputy Commissioner of Police Hilroy Brandy inter alia. DPP Brandy has responsibility for the Service Improvement Directorate. The Cabinet was apprised of the excellent performance of the Security Forces as it relates to “Operation Safe Streets”. Cabinet recorded its appreciation to the Governments of the Member States of the Regional Security System (RSS) for giving full support to making St. Kitts and Nevis one of the safest and securest destinations. The Police High Command reported to Cabinet that the support of the RSS has been a success at all levels of engagement.