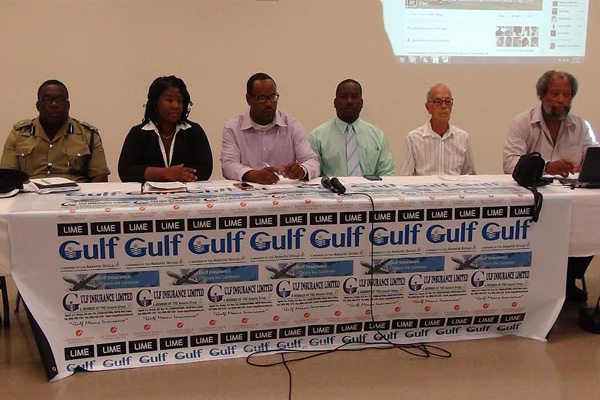 Sports Page — As the date for the 34th edition of the much anticipated Gulf Insurance Primary schools’ championships, looms closer, the organizers hosted the now annual press conference on Tuesday 17th March.

The event was chaired by Ag Director of Sports, Mr. Jamir Claxton who welcomed everyone to the event.

There were several presentations.

President of the Nevis Amateur Athletic Association, Mr. Lester Blackett gave an overview of what is to be expected come the date for the popular ‘Mini Olympics.’

He urged the athletes and officials to show up well in advance of the time, in order to ensure a prompt start.

As regards new innovations, there will be two field events for the very first time: The cricket ball throw and the standing long jump will be introduced to the prestigious meet and will be open events. However, they will not be added to the points allocated on the day.

The field events are slated for Tuesday 24th March at the ET Willet Park and there will be no entrance fee charged to members of the general public.

The opening ceremony will be at 11am and the first event will bolt off at 12.00 noon.

He also indicated that one official from the IAAF is expected for the meet and a few Gulf Insurance representatives out of Trinidad are also expected as per usual.

He also conducted a website demonstration to explain how the general public can have speedy access to relevant information on the meet.

Superintendent of Police, Mr. Hilroy Brandy noted that there will be absolutely no tolerance to negative behaviour. He noted that the Police have been on their A-game throughout the years and would have ensured that all of previous meets were incident free.

Police officers will be allowed no rest day on April 1st and will be out in their numbers, inside and outside the ET Willet Park, the venue for the event.

Everyone passing through the gates will be scanned for weapons. The vendors were also warned that as it is an event featuring children, absolutely no alcoholic beverages will be allowed for sale in the park and beverages will not be sold in bottles.

He also challenged Mr. Blackett to stipulate a set time for the meet to end, so that the Police could plan effectively.

Miss Michelle Sutton used the opportunity to emphasize the fact that it is a child friendly event and that the underlying theme will be that everyone is a winner and therefore, as was the case last year, all of the participants will be awarded with medals.

She pointed out that the children will not be overstressed hence the reason why the 1500 meters event was changed to the 1200 meters event.

She stressed that the emphasis will be more on the proper development of the children, more than the competition aspect.

Permanent Secretary in the Ministry of Sports, Mr. Keith Glasgow pointed out that the administrative aspect of the meet this year has gone through some changes.

This year it will be a threefold administrative structure which will feature Mr. Lester Blackett of the NAAA; Miss Michelle Sutton of the Education Department and Mr. Jamir Claxton, Ag. Director of Sports.

Probably the most significant announcement for the day was made by long serving local Gulf Insurance representative, Mr. Arthur Evelyn, who was at great pains to point out that the Gulf Insurance Company has been merged into a new parent company and that the usual monetary donation will not be as big as it usually is.

He indicated that this year, the company will be investing $25,000.00 in the event. Howver, much to the joy of the organizers, he further revealed that the local company in collaboration with Al Evelyn LTD would be contributing another $10,000.00 to bring the overall donation to a grand total of $35,000.00.

Another representative of Gulf Insurance, Mrs. Lorraine Browne, indicated that quite apart from the usual trinkets that will be handed out to the spectators at the Inter Primary event, the local Gulf insurance company will host an appreciation day on Friday 27th March, specifically for their customers and this will be held at the office in Charlestown.

The members of the press present and some of the sports officers were able to field questions to the presenters.

Probably the most interesting question of the day was posed by Mr. Marcellus Lee of VON radio, who asked Mr. Blackett to indicate the current status of the NAAA.

Mr. Blackett insisted that the organization was still functioning and listed a few of the active members and indicated that an AGM will be held shortly. Mr. Lee then responded that that was said the last time the question was raised.

Mr. Blackett promised that the AGM will be held this time, as soon as within two months of the Inter primary event.

Another significant announcement was made by Mr. Jamir Claxton. He indicated that the patron for this year’s meet will be Mr. Kenley Maynard, a past outstanding student/athlete of the Ivor Walters Primary school.