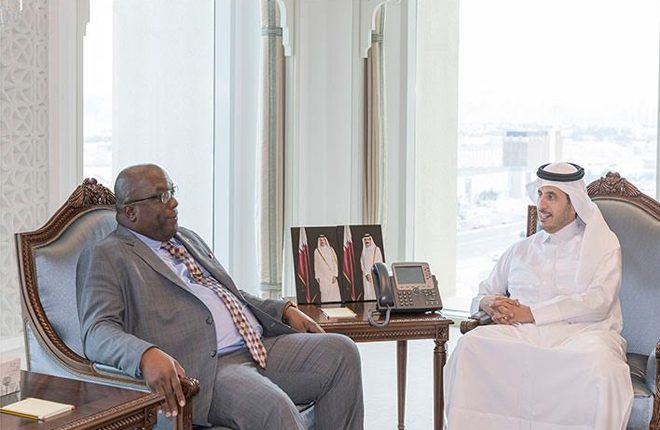 The St. Kitts and Nevis delegation also seized the occasion to meet H.E. Dr. Hamad Bin Abdulaziz Al-Kawari, a Qatari diplomat and statesman, who serves as an Adviser at the Amiri Diwan (Royal Palace of Qatar) and is the official Qatar candidate for the role of the Director-General of UNESCO, the specialized UN agency in Paris.

At an official press conference organized by Dr. Al-Kawari in the Qatar capital city of Doha, Prime Minister Harris, the leader of a small island developing state in the Caribbean, said he welcomed the new friendship being fostered with Qatar as a small, but economically and politically influential country in the Arab region.

Dr. Harris underlined his conviction that, as two small states, both countries share similar developmental concerns, notably in prioritizing education and long-term tourism investment as a basis for the future prosperity of its cherished citizens. He added that both countries share many commonalities on a policy development level, not only in terms of education and tourism, but also with respect to prestigious hotel development and heritage.

As the OECS Authority Chairman, Prime Minister Harris said he was keen to facilitate introductions in the Eastern Caribbean area, to enable Qatar to open a bridge between both regions that would facilitate the potential development of economic and cultural relations.

Accompanied by H.E. Dr. David Doyle, the Federation’s Ambassador to UNESCO based in Paris, and Mr. Justin Kareem Hawley, the Federation’s Consul General in Dubai, the Prime Minister of St. Kitts and Nevis paid a visit on the Prime Minister of Qatar, HRH Sheikh Abdullah bin Nasser bin Khalifa Al-Thani, at which both Heads of State reinforced the desire to explore areas of collaboration in economic, education and citizenship investment sectors.

“Our government is committed to building long-term relationships with vibrant states, such as Qatar, as part of our outreach strategy encompassing engagement at both bilateral and multilateral levels in the framework of the South-South Dialogue,” said Dr. Harris.

Prime Minister Harris underlined the challenges and opportunities facing small states like St. Kitts and Nevis in “diversifying economic activity towards sustainable tourism focused on the provision of high-grade hotel and resort properties that are attractive to the high-net worth clientele, as well as exploring areas such as leading edge medical tourism in a more discreet setting.” HRH Sheikh Abdullah bin Nasser bin Khalifa Al-Thani concurred with the vision of the Honourable Prime Minister of St. Kitts and Nevis.

Dr. Harris concluded that, “As small nations, we can together identify mutually rewarding projects that add value for citizens.”

During his visit, Prime Minister Harris expressed his support for the Qatar official candidate for the upcoming role of Director-General to UNESCO, Dr. Al-Kawari, a prominent, long-standing diplomat, and formerly the Minister of Culture, Arts and Heritage of Qatar.

“Dr. Al-Kawari is a most capable and qualified candidate for this post at a time of great challenges facing UNESCO,” Dr. Harris stated. “We welcome his innovative approach to the reforms needed at UNESCO and the need, in particular, for work programmes targeting the concerns and the specificities of small-island developing states. A focus on the elaboration and application of UNESCO’s core expertise and its application in fields of science, education and culture are critical for us.”

In his statement, Dr. Al-Kawari noted that the role of UNESCO’s Director-General was a challenging one. Having already served as Qatar’s Ambassador to the Organization in the 1980s, Dr. Al-Kawari said he was minded to think in terms of the smallest Member States’ priorities and of the fact that small island developing states (SIDS) need more granular levels of assistance than others.