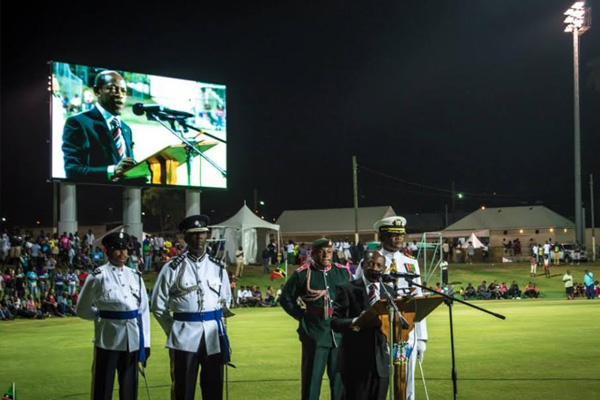 Basseterre, St. Kitts (CUOPM) — With the society in St. Kitts and Nevis changing, the Federation’s Prime Minister, the Rt. Hon. Dr. Denzil L. Douglas says a comprehensive and critical look needs to be done to the constitutional framework that governs the legislative and administrative process to reflect changing realities.

Addressing a mammoth crowd at the first nighttime anniversary Ceremonial Parade to mark the 31st Anniversary of Independence, Prime Minister Douglas listed several areas including the relations between Nevis and St. Kitts, which he noted has been the focus of much of the public discussion on constitutional reform.

“This certainly needs to be addressed with a view to ensuring, among other things, that the Government processes would continue to work smoothly and to deliver improvements in the standard of living of the people on both islands, even where there are differences of opinion between the parties in office in each island respectively. But even in the absence of constitutional reform it is critical that the key actors in Government in both islands put the interest of our people before political objectives,” Dr. Douglas said.

He said he stands ready to collaborate with any Administration in Nevis to advance the welfare of the people of both of islands in a fair and equitable manner.

Prime Minister Douglas used the opportunity to invite the CCM Administration in Nevis to enter into constructive dialogue and engagement with the Federal Government with a view to coordinating development plans and securing a brighter future for the beautiful twin-island paradise.

“There are a number of issues in relation to the Constitution that I also deem critical to the continued progress of our Nation. Specifically, the constitutional provisions in relation to the ability of the Government to incur debt must be updated. Specifically, there needs to be even more concrete provisions in relation to debt limits and a clearly defined consultation process for exceeding those limits. Of course, we have consulted extensively on the issue of debt and fiscal management through the annual budget consultation exercise, but this is based on my Government’s strong commitment to public participation in economic decision-making,” said Prime Minister Douglas.

Stating that this should not be optional and suggested that the way debt is incurred beyond certain limits should be mandated by the St. Kitts and Nevis Constitution.

“Our people have borne great sacrifices and have supported the Government in its valiant and successful efforts to bring down our debt and put our country on a solid fiscal footing. We must protect that achievement through appropriate constitutional and legislative provisions. In any event, my Government intends to develop in consultation with our people a mechanism for incurring debt and for fiscal management that would act as a sort of fiscal covenant between my Government and the people of St. Kitts and Nevis,” Dr. Douglas said.

The Constitution he suggested should also include clear provisions to protect the people from being misled by politicians who team up with a Party to persuade the people of their commitment to the agenda of the Party, knowing beforehand, that after the people have elected them on that basis, they would abandon the Party and pursue another path.

“This is a serious threat to our democracy and to ensuring that the will of our people prevails in our society. If the process by which Parliamentarians “cross the floor” is not made more responsive to the concerns of the electorate, then in a Parliament with only 11 elected members (or 5 Elected Members in the case of the Nevis Island Assembly) the likelihood of instability is very high. Of course the solution to this problem might be to increase the number of elected Parliamentarians if this is the wish of the people, but this could result in significantly higher costs. On the other hand, in the context of the increasingly complex economy that is emerging in our society, a larger Parliament with a wider range of skills and experience would definitely add value to the parliamentary processes and would help to make the very important Public Accounts Committee more effective,” Prime Minister Douglas said.

On the issue of corruption, the four-term Prime Minister said his St. Kitts-Nevis Labour Party Administration has tightened procurement practices in the public sector and have recently passed Integrity in Public Life Legislation in the Federal Parliament.

“We intend to intensify the implementation and enforcement of this critical piece of legislation with a view to combating corruption, and in ensuring that when persons in public life are wrongfully accused of corruption, they have a credible and transparent mechanism by which they may definitively establish their innocence,” the Prime Minister said.

He said that as he listened Canon Isaiah Phillip speak at the Independence State Service of attempts to influence even the Church through donations, it strengthened his conviction of the need to establish an even more comprehensive governance framework that combats corruption in the society as a whole and that ensures that public companies and institutions that are entrusted with the monies, investments, contributions, donations and savings of the people adhere to the highest standards of integrity and honesty.

“The issue of term limits for Parliamentarians need to be put before our people for their consideration on a non-partisan basis whereby each voter should be encouraged to vote based on his conscience and not along party lines. Hence, this should be an important element of any constitutional reform process. However, the political parties themselves could also initiate processes that limit the number of leaders permitted to serve a Party if that is the will of the members of the Party,” said Prime Minister Douglas.