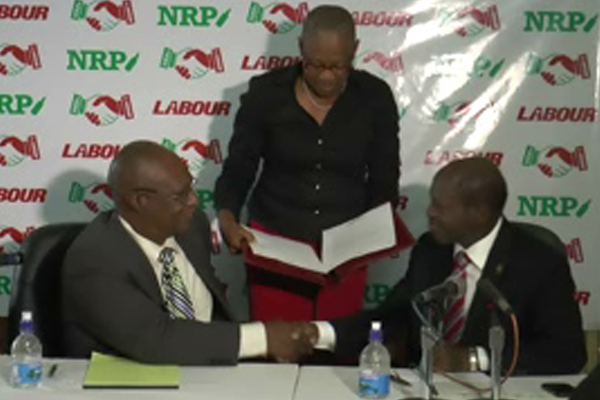 (ZIZ News) — “We have experienced a position of strength from the last election” were the words of Prime Minister, the Rt. Hon. Dr. Denzil Douglas as he spoke at Thursday morning’s press conference and “Contract for Progress” signing.

Dr. Douglas’ St. Kitts-Nevis Labour Party[SKNLP] and Hon. Joseph Parry’s Nevis Reformation Party [NRP] told the press and listeners to ZIZ radio, that the Contract for Progress is an agreement with the people of the Nation and not a contract between political parties.

According to the longstanding politician, he has always sought to have a close working relationship with the Administration and people of Nevis.

“You would remember that back in 1995 after being elected and I became the Prime Minister, we had set out then to establish a closer working relationship with Nevis. The CCM was in command of the Nevis Island Administration at that time and we sought to introduce the federal office from which we thought that we would be able to lead from a greater collaboration between the two islands, of course that effort failed. Nearly 20 years after, we are revisiting a similar exercise because the Labour Party really feels strongly we are one people,” he said.

Dr. Douglas reiterated that neither the SKNLP nor the NRP will benefit personally from the agreement. He said it focuses solely on making life more comfortable for the people of both islands.

“What is so different this time is that we have been able to look at the relationship over the last five years, one that has been enhanced and developed and flourished because of better communication and trust. Communication and trust over five years has caused us to believe and caused me in particular as the leader of our country to believe that we can go further beyond what we have already achieved,” Dr. Douglas said.