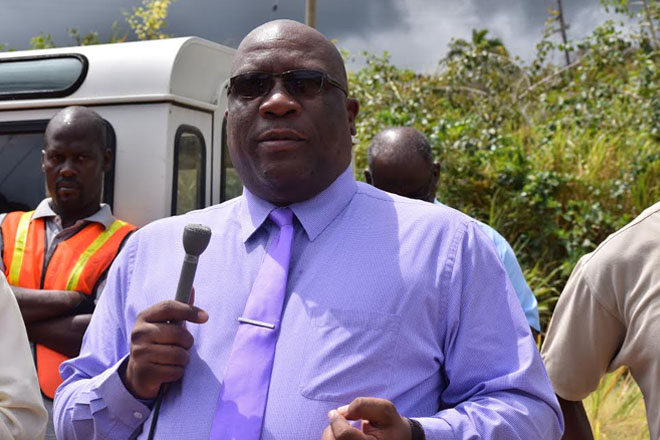 Prime Minister Dr. the Honourable Timothy Harris assured the people of the nation during a brief ceremony in Mansion today that his Team Unity Government will do all in its power to provide them with relief from the water shortage.

During the ceremony, which marked the laying of pipes to relay water from the well in Mansion to the residents of Phillip’s Village, Molineux and Borryeau, Dr. Harris said he personally regretted the inconvenience suffered by our citizens and residents as a result of a prolonged period of drought that accounted for a dramatic 55 percent drop in average rainfall recorded last year. The Prime Minister said the rainfall recorded so far this year is inadequate to replenish water supplies.

Prime Minister Harris said that because his Government “listens, hears and understands the inconvenience to the people,” the Team Unity Administration has taken steps to help alleviate the situation. The Prime Minister disclosed that, over and above the 2016 budgetary estimates, the Ministry of Finance this week released a further $900,000.00 to bring an improvement in water supply to the Basseterre area, as well as Constituency #7, specifically Molineux, Phillip’s Village, Borryeau and Lodge.

Dr. Harris said, “Water is essential for life, so we call upon consumers to conserve water and avoid the misuse of this precious commodity.”

The Minister of Public Infrastructure et al, Honourable Ian Liburd received commendation from Prime Minister Harris for offering solutions to the water problems inherited from the former regime. The Prime Minister thanked the staff of the Water Department in advance for an on-time delivery of the rural water project, having regard for the emergency situation that some communities face.

Some further actions that the Government intends to take regarding the water situation include:

– Accelerated well drilling at strategic locations around the country,
– Construction of a desalination plant,
– Conservation strategies,
– Enhancement of the water infrastructure, and
– Revision of the human resource needs of the Water Department.