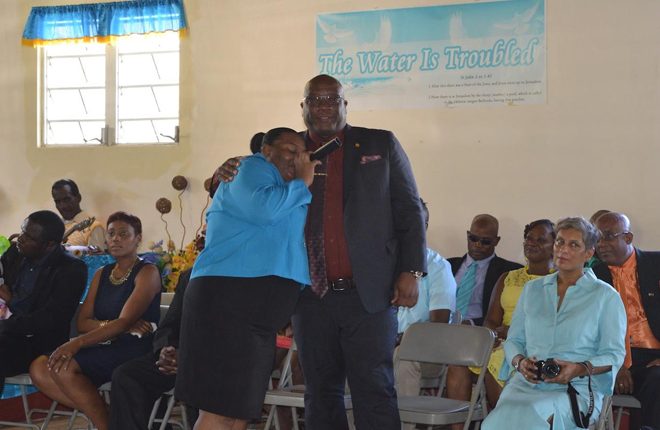 (PRESS SECRETARY) – Prime Minister Dr. the Honourable Timothy Harris once again celebrated his birthday with a special church service in St. Christopher #7, which brought out many of his Constituents who came to extend well wishes and greetings to the beloved leader who has served them exceptionally well for the past 23 years. The church service was held at the Covenant Outreach Ministry in Phillip’s Village.

Dr. Harris, who is turning 52 years old tomorrow, Tuesday, December 6th, 2016, chose to celebrate the occasion with his community members in advance of what will be a busy week comprised of Ministry of Health-related events (the handing-over ceremony for the Mental Health Day Care Treatment Centre at the Lime Kiln Commercial Development and the opening of the Oncology Unit at the Joseph N. France General Hospital), as well as his highly anticipated Budget Address that he will deliver on Wednesday, December 7th. Prime Minister Harris’ Budget Address will be followed by an extensive budget debate.

Sunday’s high-spirited service saw several persons dedicating songs to the Honourable Prime Minister and the presentation of a birthday gift from the residents of Constituency #7 (Belle Vue to Ottley’s).

Prime Minister Harris, while addressing the congregation, thanked his Constituents for their continued support over the years.

“I want to thank you sincerely from the bottom of my heart for the love, for the loyalty and the strong support that you have given me over the last 20-plus years that I have been a Member of Parliament, starting way back in 1993,” Dr. Harris said, adding “This Constituency has been very loving and very caring and has taught me how to love better and how to care more, and I say from the bottom of my heart it has been my honour and privilege to have been able to serve you and to receive always your overwhelming support.”

Among those in attendance were Deputy Speaker of the National House of Assembly, Senator the Honourable Akilah Byron-Nisbett and His Excellency Ambassador Michael Powell, Special Envoy in the Office of the Prime Minister of St. Kitts and Nevis.

Following the church service, a social gathering was held at the Prime Minister’s Constituency Office in Tabernacle.

There, Dr. Harris stated how important it is for him to celebrate his birthday every year with his Constituents, whom he described as his source of inspiration and strength.

Prime Minister Harris said, “I feel honoured by the privilege to have my Constituents with me as often as they have been, but more particularly at this moment as I celebrate my own birthday to have them share this special occasion with me. My Constituents are very special and they have shown me much love, much loyalty. They have been the source of my inspiration and even in difficult moments they have always been there for me, and so I would want as often as I can to be with and among my Constituents.”