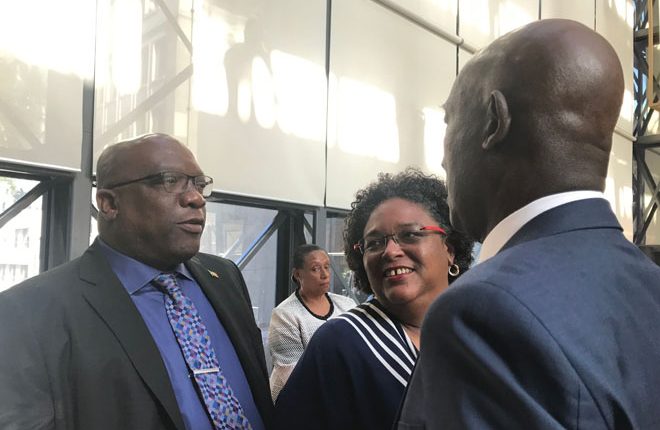 Prime Minister Harris, Chairman of CARICOM on his successful trip to Uruguay

Press Secretary in the government of St. Kitts and Nevis, Ms. Valencia Grant sat down with Prime Minister Dr. The Honourable Timothy Harris on Friday February 8 2019 in Montevideo to discuss his successful trip to Uruguay in his capacity as Chairman of CARICOM.

A CARICOM delegation led by chairman, Dr. Harris has been holding a number of high level meetings in Uruguay as they seek to address the political crisis in Venezuela.

During the interview, Prime Minister Harris explained why it was important for CARICOM to be represented in Montevideo this week, stating that it was necessary for their voices to be heard on the way forward with respect to Venezuela.

He said that he believes the CARICOM delegation was able to achieve what they hoped to accomplish during the international conference.

The plan, referred to as the Montevideo Mechanism, entails a four-part approach, which comprises dialogue, negotiation, commitments and implementation phases.

The CARICOM Chair added that the Montevideo framework will help to provide an acceptable end in Venezuela.

As he wrapped up the discussion, Dr. Harris said, “Respectful rule of law, democracy, constitutional framework being respected, non-interference, peace and progress are what we want for the people of Venezuela, ultimately”.