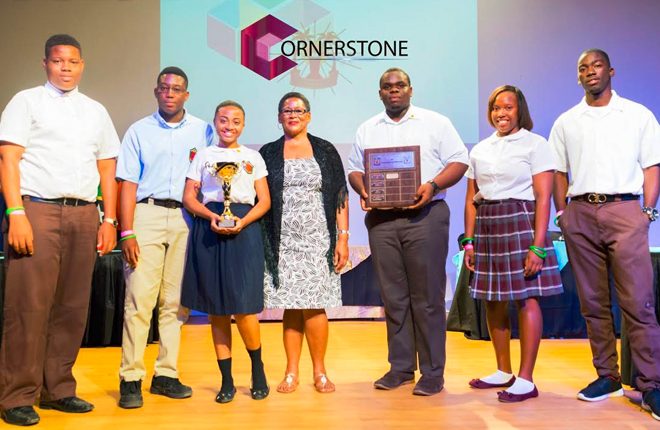 BASSETERRE, St. Kitts, February 27, 2017 (Press Unit in the Office of the Prime Minister) – Prime Minister Dr. the Honourable Timothy Harris has extended his congratulations to the Nevis Debating Team on its decisive victory in the 2017 edition of the Leeward Islands Debating Competition (LIDC).

The competition, now in its 45th year, was held at the Nevis Performing Arts Centre from Thursday, February 23 to Sunday, February 26.

Asked to propose the moot: “The atrocity of our age is the billions of dollars spent on sports,” the Nevisian pair of Gabriella Brantley and Rol-J Williams defeated their rivals from neighboring Antigua with a final score of 578 to 489 to win the competition.

Brantley was judged the Best Speaker in Sunday night’s final while 16-year old Smithen took home the award for the Best Overall Speaker.

In extending his congratulations to the Nevis debaters, Prime Minister Harris said their “outstanding victory has brought honour and positive attention to St. Kitts and Nevis.”

He continued, “Their excellent performance is further vindication of what the young persons of St. Kitts and Nevis are made of and I would wish each young person find excellence within as they go through life. Equally I would want to extend the very best to all the teams for adding value to the competition. Each of them is an ambassador to their respective countries and we thank them for participating.”

The 45th Leeward Islands Debating Competition was hosted by the Literary and Debating Society of the Nevis Sixth Form College.

The LIDC, founded in 1972 by George Irish of Montserrat, began with three participating islands; Montserrat, St. Kitts and Antigua. It has since evolved into an annual event.