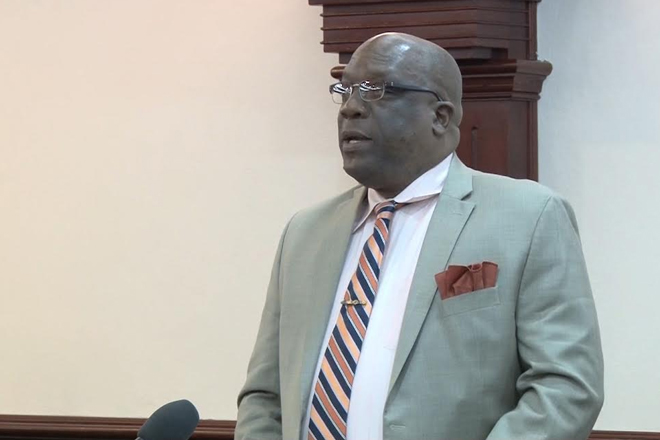 On Wednesday, in the National Assembly, St. Kitts and Nevis Prime Minister Dr. the Honourable Timothy Harris explained the motivation behind his administration’s push for the repeal of the section in the National Assembly Elections Act (Cap. 2.01) – Section 75A – that deals with the early voting of security forces and persons employed by the State to perform essential services.

The controversial section in the National Assembly Elections (Amendment) Bill, 2014 was introduced by the Douglas administration in the National Assembly on Friday, October 24th, 2014. This allowed designated persons to vote not more than two days prior to a general election. Last year, early voting was held on Saturday, February 14th, two days ahead of Election Day.

During yesterday’s National Assembly, Prime Minister Harris said, “Never was there a problem with members of the national security services nor essential services being able to vote on time. Indeed, these persons have always been prioritized in voting.”

The Prime Minister continued: “Mr. Deputy Speaker, the reality is that early voting created unnecessary uncertainty and confusion among the electorate, and it added expense to the process of elections in St. Kitts and Nevis. Many people felt scared about voting early because they had no confidence in the Government. There was the fear that this early voting was intended to get an early inkling into the mood of the electorate and that the privacy and integrity of early votes would be compromised.”

Section 75A – Why it ought to be repealed

Very little demand that was due in part to No Confidence

After reading from the Observer news report, Prime Minister Harris said, “I believe that this article brings clarity to the concern with respect to the early voting, and it produces further evidence in support of the claim that nobody wanted early voting.” He added: “If the Observer’s sampling is to be believed, the very people [who were to vote early] were saying that something fishy was afoot. We criticized it whilst in Opposition and now we are in Government we have an opportunity to bring an end to this fishy piece of legislation. This particular amendment [the National Assembly Elections (Amendment) Act, 2016] is seeking to do so.”

Section 75A compromised the Right to Privacy that is enshrined in Section 70 ((1) of the National Assembly Elections Act (Cap 2.01)

The Prime Minister said, “Given our small population – the fact that everybody knows everybody – and the terribly low voter turnout on early voting day, it was evident that the sanctity and the secrecy of the votes cast were seriously compromised,” and he added that, “When we begin to tear at those fundamentals of the democratic process then we begin to go down a dangerous road.”

Prime Minister Harris showed how the pernicious Section 75A conflicted with the Constitution. Section 29(4) of the St. Kitts and Nevis Constitution states that, “In any election of Representatives the votes shall be given by ballot in such manner as not to disclose how any particular person votes.” Dr. Harris explained that, in a number of places where early voting took place, it is very easy to surmise who voted for whom. He said the possible significance of this did not go unnoticed by people who were eligible to vote early. Prime Minister Harris quoted statistics that show in Constituency #6 (the Parish of St. Paul), for instance, all 17 early votes were cast for the St. Kitts-Nevis Labour Party’s representative, then Prime Minister Dr. the Honourable Denzil Douglas. While the votes were made by secret ballot, as intended, the miniscule pool of early voters created an effect that breached electoral and constitutional law. For instance, in Constituency #11 (the Parishes of St. James, Windward and St.
Thomas, Lowland), only three persons voted early; two of them for NRP and one for CCM.

Prime Minister Dr. the Honourable Timothy Harris added: “In #10 (the Parish of St. George, Gingerland), zero persons voted. Nobody in #10 wanted the Douglas regime to be aware of how they would vote. So they said, whether they were NRP or CCM, they had no confidence in the system.”

“This is further evidence of the lack of demand and the uselessness of this exercise in which the Douglas regime took us into,” Prime Minister Harris said.