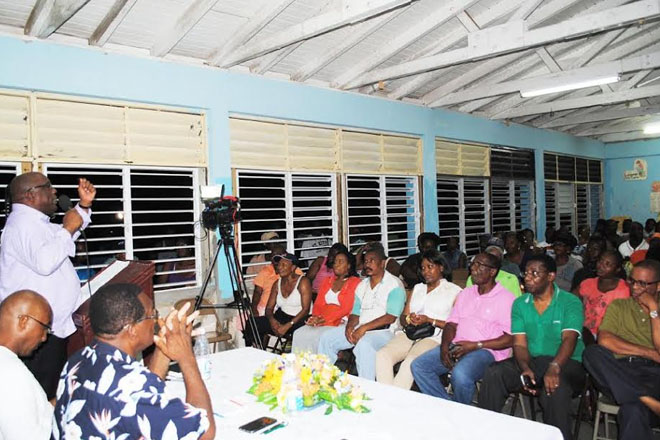 Basseterre, St. Kitts — It was a homecoming like no other. Prime Minister the Hon Dr Timothy Harris who had just arrived from New York where he addressed the 70th Session of the UN General Assembly, was received warmly by an enthusiastic crowd at a town hall meeting held at the Edgar T. Morris Primary School in Tabernacle on Sunday October 4th.

He had arranged for the town hall meeting to talk and listen to his people. His people listened and talked to him. And when they talked, not a single one said that projects by their parliamentary representative just started after he become the Prime Minister, but gave record of how long he has been executing those projects for the benefit of his people.

All the chairs in the school hall were occupied. Those standing outside were more than those sitting inside, but with the blaring loudspeakers they were able to follow the town hall meeting’s proceedings. Dr Harris was accompanied by the Hon Eugene Hamilton who said he was the Prime Minister’s neighbour occasioned by their constituencies (Number 7 and Number 8) bordering each other.

Hon Hamilton told the attentive audience that when a stone was thrown at him at a PAM campaign rally in Old Road which broke his teeth and damaged his jaw, the only person in the then Labour Government who called him to express his concern was the Hon Dr Timothy Harris.

“I recall when the people who ran British American from Trinidad got themselves in trouble, that it was Dr Harris I was able to call in the government,” stated Hon Hamilton. “Dr Harris stood up to help our people, because Trinidad was not looking after us, but Dr Harris said, ‘I am going to Barbados for an OECS finance ministers’ meeting, and I want you to come’.”

Members of the Planning Committee of Constituency Seven were given an opportunity to update those present on what they have been doing. Mr Crace Lewis updated them on the Inner City Basketball League which started 12 years ago with only five teams but now has 12 teams. It has been renamed Harris Basketball League. He advised that the Molineux hard courts had received a well-deserved makeover.

Mr Calvin Farrell updated them on the Dr Harris Dominos League which has been running for 20 years. “20 years is not 20 days. It has been hard work and dedication. Any time we called on Dr Harris, he was always willing to support us all the time.”

Help-A-Child Programme has been running for 12 years and according to Ms Myrtilla Williams, 350 promising primary school students in Constituency Seven had received support to a tune of $165,000. She advised that they have 24 students in the programme and that each student receives $500. This number will now be increased to 40.

Speaking on Possibilities and Opportunities in the constituency was Mr Lenworth Harris, who is also the General Manager of the Development Bank of St. Kitts and Nevis, who alerted the audience that in collaboration with the Government and PetroCaribe – the people of Venezuela – the Federation was able to secure US$5 million to provide opportunities for small to medium enterprises (SMEs).

“Whatever business ideas you have, the doors are open and people are rushing through the doors,” said Mr Harris. “We in the country need to make use of this opportunity. The process is simple: If you have an idea you come to the Development Bank and make an appointment to see one of the officers. If you have challenges putting your ideas together, our Business Support Unit will do that for you.”

He said that the maximum loan one could get is US$100,000 and the repayment period is over seven years at an interest rate of five per cent. He pointed out that the demand is great as they have appointments lined up to as far as November. He added: “Make sure you come through the door. Do not allow this opportunity to pass you by.”

At the constituency level, Mr Lenworth Harris noted that a development committee has been put in place for the constituency and advised persons interested in being part of it to come forward, noting that each of the villages in Constituency Seven will have a representative.

Permanent Secretary in the Prime Minister’s office Mr Osbert DeSuza, who had travelled with the Prime Minister to New York for the UN General Assembly, advised how the Sugar Workers Restoration Fund is paying out gratuities to former sugar workers from proceeds of an EC$16 million grant provided by the Venezuelan government after an intervention by Prime Minister Harris. As people asked questions, they referred to him as the ‘Sugar Man’.

Members of the audience were given the chance to raise any questions and make comments. Most of them dwelt on the current pay out for former sugar industry workers while one lady asked a question on behalf of her daughter as to when roads in Tamarind Tree Housing Project would be upgraded. Others, and the majority, congratulated and thanked the Prime Minister for what he has done for them.

Mr Vincent Roberto Benjamin, better known as Mr Culture, said that when he fought to have Team Unity elected, the main reward he expected (and got) was the removal of Dr Denzil Douglas (the former Prime Minister).