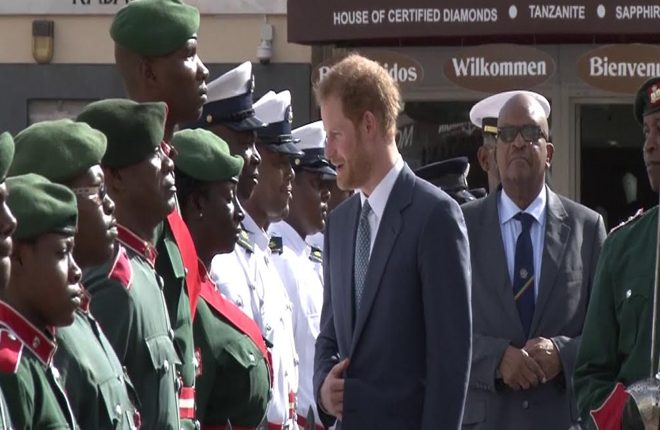 (SKNIS): His Royal Highness Prince Harry, officially Prince Henry of Wales, received a warm welcome to the Federation of St. Kitts and Nevis when he disembarked from the Royal Fleet Auxiliary Wave Knight at Port Zante, Basseterre, today (November 23.)

According to a press release on the official website of the British Royal Family, Prince Harry is on a tour of the Caribbean on behalf of Her Royal Highness Her Majesty The Queen, between November 20 and December 4, in the year of the Queen’s 90th birthday, “to continue to develop The Royal Family’s strong bonds with the people of these important Commonwealth countries.” The tour includes the countries of Antigua and Barbuda, St Kitts and Nevis, St Lucia, St Vincent and the Grenadines, Grenada and Barbados, as well as Guyana.

At Port Zante, Prince Harry smiled graciously as his arrival at the cruise pier was met with cheers and applause of several spectators who had gathered. Accompanied by St. Kitts and Nevis’ Governor General, His Excellency Sir S. W. Tapley Seaton, Prince Harry stood at the Saluting Dias to be given a royal salute by representatives of the Royal St. Christopher and Nevis Police Force and the St. Kitts-Nevis Defence Force and its Coast Guard Unit that made up a Guard of Honour.

Prince Harry thrilled spectators by going along the length of the partition greeting several of them. The crowd included residents and other onlookers such as tourists who had disembarked from a cruise vessel, students of the Tucker Clarke Primary School, located in Newtown, Basseterre and students of the Precious Gems Preschool, St. Peter’s.

Prince Harry’s next stop is the UNESCO World Heritage Site Brimstone Hill Fortress National Park, where he will be entertained by cultural performers and participants of a Youth Rally, before he journeys over to the sister isle of Nevis.