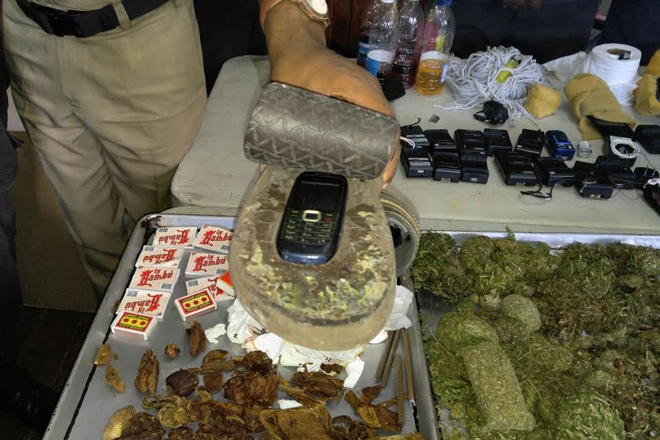 Prison Closure Leads To Confiscation Of Hundreds Of Pieces Of Contraband

(ZIZ News) — The 21-day closure of Her Majesty’s Prison proved successful as hundreds of pieces of contraband were found and confiscated.

The Prison Emergency Response Team (PERT) of the prison carried out an extensive search of the prison and found that many prisoners were in possession of items that were not allowed.

Superintendent of Prisons, Junie Hodge held a media briefing ahead of the prison’s reopening.

Among items found were 125 cellular phones, 160 lighters, tobacco, alcohol and about 8 pounds of marijuana.

With the confiscation of the items, came the superintendant’s seal of approval that the operation was a success.

“The exercise in my opinion bears fruit so we can be in a better position from here onwards as to how we govern the facility so that we can limit the amount of activities, in terms of illegal stuff coming into the prison,” he said.

Superintendent Hodge said the prisoners and visitors found innovative ways of getting forbidden items into the prison and keeping them hidden, pointing to one incident where someone carved the size of the phone into their footwear so that it would be undetectable when they come into the facility.

According to the Superintendent, the prison will introduce certain measures to limit prisoners’ access to contraband.

The prison’s population currently stands at 203 males and 5 females.

The closure of Her Majesty’s Prison officially ends at 12 am on February 23rd.