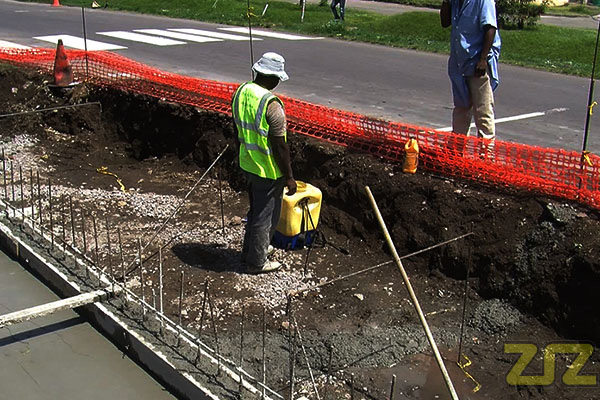 ZIZ News — Construction is continuing on the South East Peninsula Road Project, with work currently being done on Timothy Hill, the round-a-bout and the storm drains at Pond’s Pasture.

In a recent interview, Managing Director of ADeB Consultants, Martell Lee said the project had suffered a few setbacks to date, particularly on phase two of Pond Road.

This involves addressing the flooding problems in the area.

He said, “The rains did affect them and they lost some days and when they are working in Sol through that area, once there are deliveries at Sol they can’t work so they are losing substantial time although it’s not quite evident to the public that those days are counting against them.”

Lee then noted that the only thing left to do on the round-a-bout is to rebuild the fence at the Eastern Caribbean Central Bank.

“The only section to complete now is the fencing which we have ordered and that’s a special type security fence approved by the bank and the delivery for that is another 3-4 weeks hopefully we’ll have that. The road markings and signs and so forth will be in place. I think the signs they shipped they are incorrect so the supplier are replacing those.”

Part of the project will also see the benching of Timothy Hill to address the issue of falling rocks. A tunnel will also be constructed.

Lee said a portion of that project should have also been completed some four months ago.

“Reasons are basically the hardness of the rock. The contractor has indicated that they have encountered much harder material than anticipated. We also had to work within certain safety requirements at that height and with the width of the benches we can only operate three or four pieces of equipment at a time on a single bench so one has to be completed before we can get onto the other,” he explained.

The overall South East Peninsula Road Project, which was broken down into six sub-projects, involves upgrading the Bay Road onto Sandown Road right through to the Southeast Peninsula.