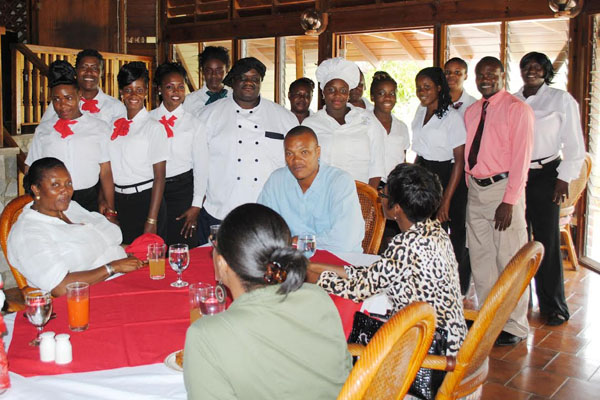 BASSETERRE, ST. KITTS — Mr Geoffrey Hanley, Project Manager of the now highly successful People Employment Programme (PEP) which was launched by the Federal Government of St. Kitts and Nevis one year ago is welcoming the assurance that the programme will continue.

The Project Manager, who was commenting on Prime Minister the Rt Hon Dr Denzil Douglas’ New Year message in which he gave his assurance that his Labour Government would not abandon the young people who are now gaining skills while earning a salary courtesy of the People Employment Programme, said that year 2014 will be one of growth and sustainably.

“In St. Kitts and Nevis we have a caring Prime Minister in the Rt Hon Dr Denzil Douglas who saw the needs of the country’s young people and decided to give them the chance to bring out their full potential by launching the People Employment Programme one year ago,” said Mr Hanley.

“Just as the Prime Minister said in his New Year address, the programme, which I was given the opportunity to head, has been the blessing it was intended to be and has scuttled the wishes of naysayers who said that it would not last. One year is over and we are moving into another year of bringing blessings to our people as the Prime Minister has confirmed.”

With a new impetus, the Project Manager is assuring the Prime Minister and the country on a whole that as PEP moves forward it is his intention, and that of the Management Committee, to ensure that more lives will be touched to bring this blessing to many.

He observed that during the month of January the People Employment Programme, which has participants both in St. Kitts and in Nevis, would be doing a number of reflections and evaluations on the areas that they need to improve on, and also to look at a number of recommendations that would have been made, and even those suggested by the participants.

“Some of the areas of course we are going to be focusing on is ensuring that more persons on the programme would end up in permanent jobs, and looking at self employment more vigorously this year,” revealed Mr Hanley.

That it was said some time ago that PEP would be permanent, and the Prime Minister has confirmed it, Mr Hanley noted that they have a consultant who is on the ground right now as the programme is moving towards the launching of its other phase that would then carry it into a much more sustainable programme.

“This will also be a time when we will be encouraging our participants to be much more focused as we will be putting a lot of emphasis on trying to ensure that they begin to be tested so that they can end up with their CVQ certificates,” noted Mr Hanley. “These are some of the things we are working towards ensuring that they happen this year.”

One of the areas of growth for the People Employment Programme will be the setting up of a PEP School of Technology where they will introduce computer and related fields of training in one of the community centres where training will be offered for persons in the programme and also those not in the programme but would be interested in gaining that kind of knowledge.

The Project Manager was also in full support of the Prime Minister call on Tuesday January 7 to the participants in the People Employment Programme to demonstrate high levels of discipline, focus, and commitment during his ‘Ask the Prime Minister’, live radio programme.

“The advice is timely coming from a caring leader,” said Mr Hanley. “We at PEP are grateful to note that our Prime Minister has a very good grasp of what is happening in the country, and his comments are an indication that he cares for the young people in the programme that has changed the economic outlook of this country.”

To this effect, Mr Hanley said that increased supervision will be one of their main area of focus to ensure that those who are in the programme take what they are doing seriously as failure to do so, they would not only be letting themselves down but their families and the government that is spending large amounts to keep them in training and employment at the same time.

“We have also come across some ‘double dippers’ that we have already been working on because one of the policies in the programme is that you cannot be on PEP and have another source of employment,” pointed out the Project Manager.

“So these are some of the challenges that we have been working towards ensuring that we have a much smoother year 2014 and by extension the same things to be happening in Nevis as well. We do not want to let our Prime Minister down after he would have worked so hard to ensure that our young people are not idle.”