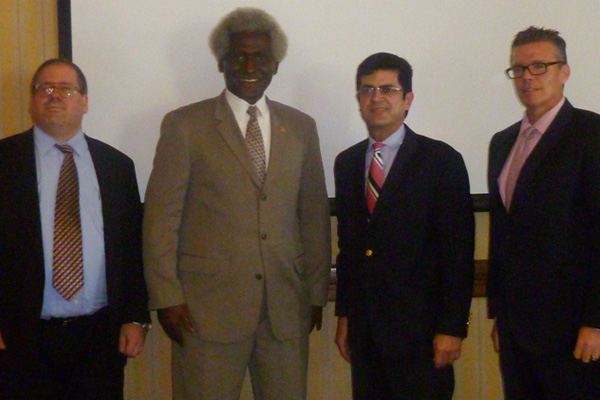 A U.S. trade mission is an overseas program for American firms which want to explore and pursue export opportunities by meeting directly with potential clients in overseas markets.  This usually consists of a group of businesspeople led by a senior government official.

The delegation visited Barbados on board the Carnival Valor.  A unique concept in business travel, they also visited St. Lucia and St. Kitts and Nevis, two of the seven countries to which U.S. Embassy Bridgetown is accredited.

In his remarks at the Hilton Barbados Resort, U.S. Ambassador to Barbados, the Eastern Caribbean

Executive director of the Puerto Rico Trade Company and lead of the delegation, Francisco Chevere, said that he was pleased with the response from local businesses and believed that this mission was mutually beneficial.

After the opening session, the Puerto Rican businesses held private meetings, known as “one-to-one” meetings, with selected Barbadian companies, in a bid to increase trade between the two countries.

With “one-to-one” meetings, local businesses are pre-screened to match the trade delegation’s business objectives, whether for representation, direct sales or joint ventures in the local market.

U.S. Embassy Bridgetown was pleased to support this first trade mission for 2014, as it aligns with the Mission’s goal to promote and facilitate U.S.-Caribbean trade.