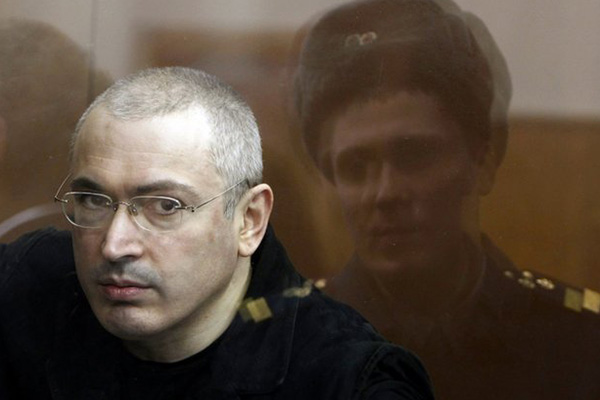 Mr Putin told reporters he had received a request from Khodorkovsky, who has been in custody for a decade, to pardon him on humanitarian grounds.

But representatives of the Kremlin critic deny a request was made.

Khodorkovsky, who is regarded by many as a political prisoner and has long insisted he is innocent, is currently due to leave prison next August.

Khodorkovsky, 50, and fellow defendant Platon Lebedev were convicted of stealing oil and laundering money in 2010. They were already serving time for tax evasion.

The European Court of Human Rights criticised the trials but rejected claims they were politically motivated.

As head of the now defunct oil giant Yukos, Khodorkovsky was once Russia’s richest man.

Speaking to reporters after his annual news conference in Moscow on Thursday, President Putin said he had not received a request from Khodorkovsky in the past.

“And then quite recently he wrote such a document and addressed a request for a pardon to me,” Mr Putin said.

“He has already been in detention more than 10 years, this is a serious punishment and he is referring to humanitarian circumstances as his mother is ill.”

“I think given the circumstances we can take the decision and very soon the decree to pardon him will be signed,” Mr Putin said.

But Khodorkovsky’s main lawyer, Vadim Klyuvgant, told Russia’s Ria-Novosti news agency: “He has not made a request and we do not have information that someone has made a request on his behalf.

“We do not have such information although there were requests to pardon him over the years from different individuals.”