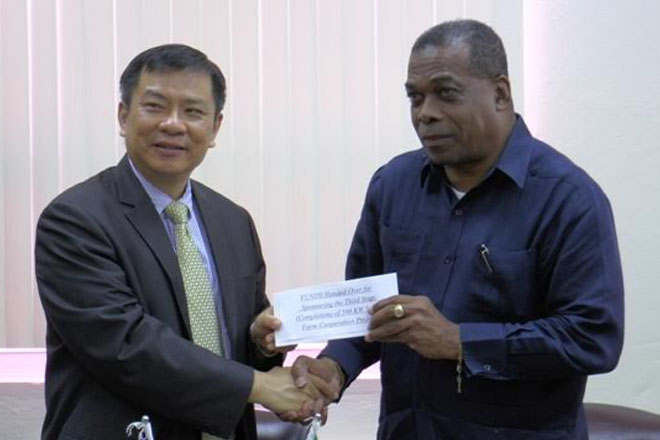 (ZIZ News) – On Thursday, officials from the St. Christopher Air and Sea Ports Authority [SCASPA] and SKELEC joined representatives of the Republic of China on Taiwan and the Ministry of Public Infrastructure for a significant cheque presentation ceremony.

Resident Taiwanese Ambassador, His Excellency George Gow Wei Chiou, said one cheque will enhance the check-in area at the Robert L. Bradshaw International Airport while the other will complete the work being done at the Solar Farm on the Frigate Bay Road.

“Under the guidance of the Ministry of Public Infrastructure, I believe the Robert Bradshaw International Airport will provide a new and efficient service for the passenger very soon,” the Ambassador continued as he commented on the projected work for the airport.

The Hon. Ian Liburd, under whose umbrella SCASPA and SKELEC fall, accepted both cheques which each value US$300 thousand.

The ROC-Taiwan made a significant contribution to the renovation of the airport’s departure area, several months ago.

Regarding the Solar Farm, ZIZ News has learnt that testing has already been carried out and it is expected that that 0.5 megawatt farm will be officially handed over to the government soon.

Thursday’s presentation ceremony was held at the Water Services Department in Needsmust.