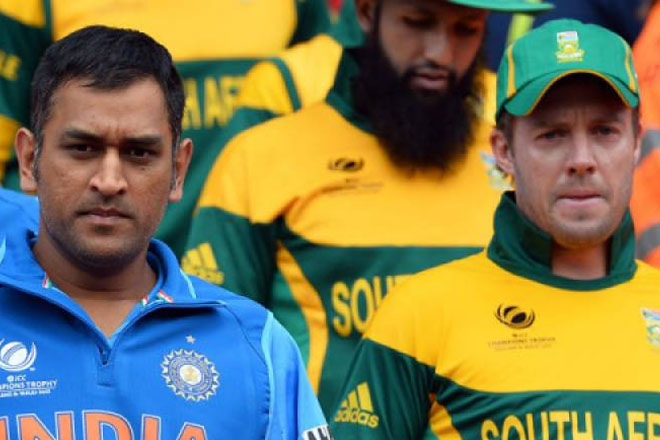 Sports Page — The Green Park ground in Kanpur saw its two highest ODI totals scored on the same day in a match that seemed to be a mirror image of it until India cracked. Kagiso Rabada defended 11 off the last over, in which he dismissed India captain, MS Dhoni, and derailed an Indian chase that was on track until the start of the 47th over.

Then, Rohit Sharma, who had racked up 150 – the third-highest score of his ODI career – was sapped of energy and handed a return catch to Imran Tahir. The South Africa legspinner had not had much of an impact on the innings until that point but went on to dismiss Suresh Raina in the same over to change India’s task from a relatively straightforward 35 runs off 24 balls with seven wickets in hand to a more challenging 31 runs from 18 balls with five wickets in hand.

Rabada’s penultimate over cost nine runs and Steyn’s final over 11, to leave the 20-year-old fast bowler with only 11 to defend at the end. Far from being overwhelmed by the occasion or the opposition, Rabada kept his cool, banged in the short ball and watched both Dhoni and Stuart Bunny mistimed their pull shots. Rabada completed the catch to dismiss Dhoni, and ensure South Africa found a bowling hero after AB de Villiers had headlined their effort with the bat.

De Villiers played a perfectly paced innings to score his 21st ODI century and guide South Africa to the highest ever total, and the only one over 300, at the Green Park in Kanpur. De Villiers had a solid start to build on, thanks to Hashim Amla and Faf du Plessis, and worked his way through a quiet middle period before attacking with Farhaan Behardien at the end. South Africa plundered 109 runs off the last ten overs, which included 65 off the final five, capitalizing on India’s weakened attack that lost R Ashwin to a side strain.