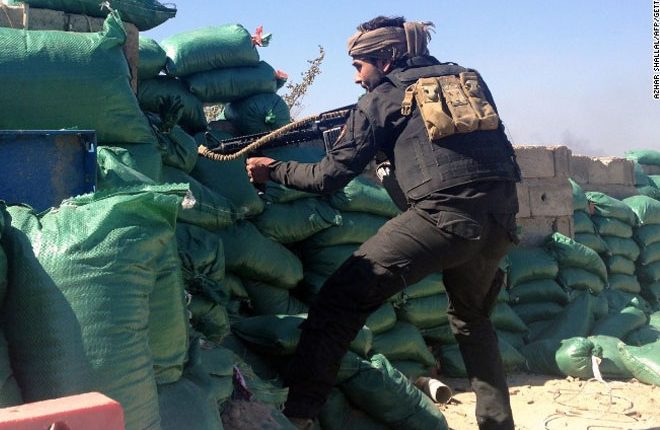 West of Baghdad, Iraq (CNN) — Falih Essawi shouted on the phone as he described his situation. From his point of view, ISIS militants might be just hours away from taking the key Iraqi city of Ramadi.

Fierce fighting has engulfed Ramadi, which lies only about 70 miles (113 kilometers) west of Baghdad and is the capital of Anbar province, Iraq’s Sunni heartland.

Essawi, the deputy head of the Anbar Provincial Council, told CNN from inside the city Wednesday that it’s unclear how much longer government troops can hold their front lines against the ISIS offensive.

The politician said he was on a front line himself, armed with a machine gun. Security was “collapsing rapidly in the city,” and he begged the Iraqi government for reinforcements and the U.S.-led coalition against ISIS for air support.

“This is what we warned Baghdad of what’s going to happen,” Essawi told CNN by phone, referring to the Iraqi government at the capital. “Where is Baghdad? Where is al-Abadi?”

His plea for help comes the day after Iraqi Prime Minister Haider al-Abadi met with U.S. President Barack Obama in Washington to seek more support for the fight against ISIS.

“Just Allah knows if we will survive this,” Essawi said.

The extremist group’s offensive in Ramadi shows its resilience despite months of U.S.-led airstrikes and its recent defeat by Iraqi forces in the northern city of Tikrit.

ISIS fighters have Ramadi under pressure from several angles.

Over the weekend, the militants seized control of areas north of Ramadi. Routes south of the city were taken some months ago.

That leaves only areas to the west of Ramadi in the hands of government forces, but those positions are under threat, Essawi warned.

The recent fighting has driven a steady stream of refugees out of the city. On Wednesday, some residents packed what they could into metal carts as they prepared to flee on foot.

People also were fleeing the areas where ISIS was advancing east of Ramadi.

A CNN team met with three families that had fled an ISIS assault in the Albu Ghanem area. Those families said Iraqi security and military forces withdrew from Albu Ghanem after a battle with ISIS, which took over the area quickly.

One fleeing Albu Ghanem resident, Abu Ahmed, paused to talk to CNN as he and his family walked east toward Baghdad, crossing a bridge over the Euphrates River. He said four ISIS militants had entered his house and set up a sniper position on his roof.

Abu Ahmed said he, his wife and four children walked away from the home with his elderly mother while the ISIS fighters were busy setting things up there. He said his family left everything behind.

His family was using a cart to carry his mother, who couldn’t walk. While talking about the fighters’ takeover of his home, his wife started crying and asked God to help the rest of the families who are stuck in Albu Ghanem.

Ramadi has seen intense and persistent fighting for months. ISIS took over parts of the city in the first half of last year, placing it at the heart of a deadly tug of war ever since.

The U.S. military has carried out multiple airstrikes against ISIS targets near Ramadi in recent weeks.