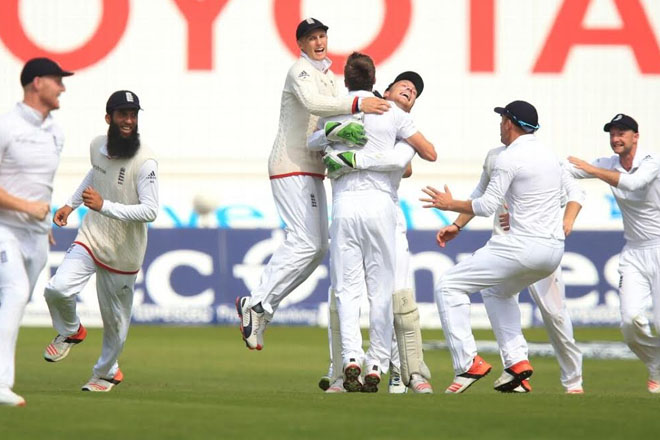 Sports Page — England regained the Ashes 10.2 overs into the third day at Trent Bridge as they completed a thumping win by an innings and 78 runs in the fourth Investec Test. It was 599 days since England fell apart in an Ashes whitewash in Australia. The rebuilding has been painful, but Alastair Cook’s young England team has beaten an experienced Australian side that will now be dismantled.

The last act was down to Mark Wood – Australia’s last man Nathan Lyon considering a leave and instead dragging the ball back into middle and leg stump. But with Australia seven down at start of play the smiles had crept onto England’s faces from the moment they took the field and, on the players’ balcony, Trevor Bayliss and Paul Farbrace did a passable impression of the Jollity Brothers.

Ashes cricket can turn its combatants into heroes, and often it can destroy them too. Up on the Australian balcony, Michael Clarke, a captain who had failed again to win the Ashes in England, mournfully watched the final stages from the Australian balcony as Cricket Australia confirmed that he will retire at the end of the series.