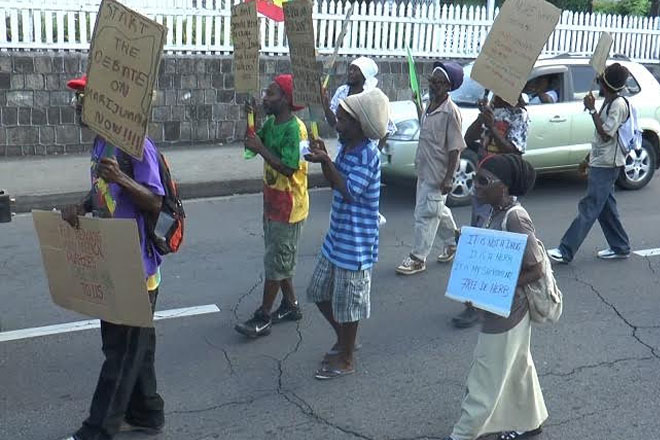 (ZIZ News) — Members of the Rastafarian community in St. Kitts and Nevis held a peaceful march on Saturday afternoon protesting against what they call the “suppression of their rights”.

The march and rally, hosted by the Organisation of Rastafari in Unity, was used to reignite their call to end the discrimination against marijuana.

One member of the organisation, Delroy “Ras Iroy” Pinney, said in their opinion, humans should have the right to utilise marijuana as they see fit.

“We are here, the Organisation of Rastafari in Unity, to take part in what we call the Annual Ganja Rally,” he said.

“For the past four years, we’ve been trodding, marching, protesting against all forms of discrimination against Rastafari and the whole nation. But this year, we’re concentrating on the herb. It’s time Babylon free up the herb. They want to criminalise and legalise but rastaman say when you’re doing all that, first and foremost, I and I have the sacramental right for the herb, so free up the herb,” he added.

The Rastafarians marched along Cayon Street, down Church Street and across Liverpool Row before making their way up Fort Street and back onto Cayon Street.

The march ended at the Independence Square where a rally was held featuring speeches, video presentations, music and food.