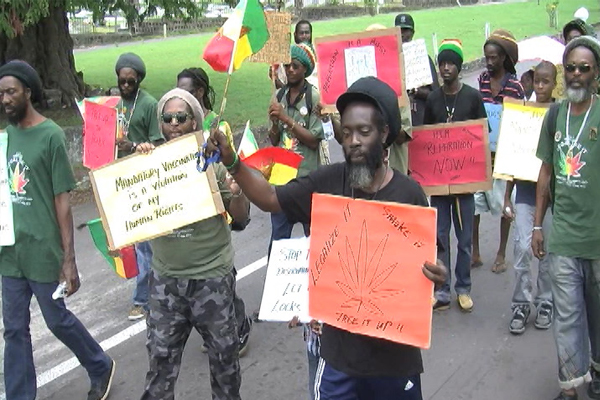 Rastafarians march for their rights

(ZIZ)– Members of the Rastafarian faith marched through the streets of Basseterre on Saturday in attempt to raise support for a number of issues associated with their faith.

The march and rally, now in its third year, was staged by the Organization of Rastas in Unity.

Member of the Organization of Rastas in Unity and activist for the Rastafarian faith, Ras Dabo Penny outlined some of the issues they were marching against.

“This is the third year now we have organized the march, our protest march and rally in support of the decriminalization of marijuana and also this year, for the CARICOM governments to apologize to the Rastafari community. We also had another issue onboard, we are getting that rectified but this year we really want to focus on the ending of discrimination, the decriminalization of marijuana and the apology from the Caribbean governments,” he said.

He explained what, in their view, the CARICOM governments should be apologizing for.

“The apology for the injustice that has been done to Rastafari in the Caribbean over the years, knowing the fact that we now have to stand shoulder in shoulder with our Caribbean brothers as we seek reparations. Reparation is one of the things now that Caribbean people have come conscious about and so we as the Rastafari movement has been shouting about reparations for over millenniums now and so it is good to see that our brothers have been enlightened in the quest for reparation,” he said.

Ras Dabo also applauded the step taken by CARICOM heads in setting up a Reparations Committee and a Regional Commission on Marijuana.

He said this is a step in the right direction.

“Last year in St. Vincent, there was a conference establishing the Caribbean Reparations Committee and during that conference there was a call for Caribbean governments to apologize to the Rastafari community knowing that now the cause that the Rastafari stood for they are now standing for and so it is fitting. We know the Chairman of the Regional Reparations Committee asked for such, we don’t know how much Caribbean governments are in the mindset of doing that but it is something that we call for also because we think that the injustice and the brutalization that our people suffered over the years it should be really something that our people should be ashamed of,” he said.

The Organization of Rastas in Unity is also trying to rectify a recent change made by the Ministry of Education in relation to the dress codes of Rasta children and children with dreadlocks.

Saturday’s march culminated at the Independence Square with a rally.