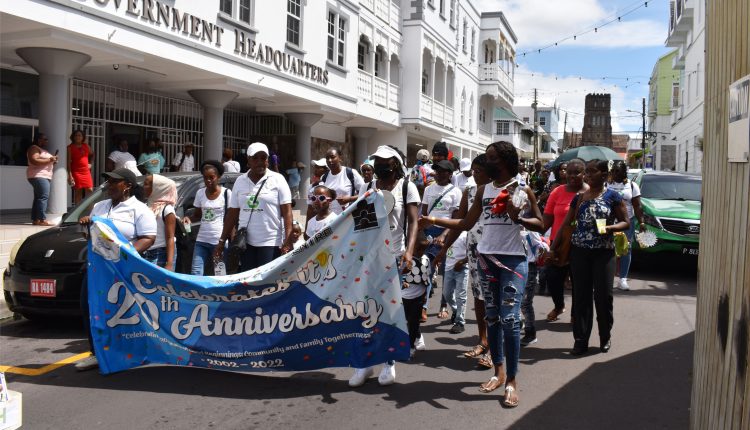 BASSETERRE, ST. KITTS, June 27, 2022 (MMS-SKN) — Resident Ambassador of the Republic of China (Taiwan), His Excellency Michael Chau-Horng Lin, is lauding the efforts of the government through the Ministries of Education and Environment in sensitising children at a tender age on the importance of recycling waste that is generated in the country.

Ambassador Lin had, on Friday, June 24, joined the Minister of Education, the Hon Vincent Byron Jr. and the Permanent Secretary in the Ministry of Education, Mr William Vincent Hodge, and other high-ranking officials for the 37th celebration of Child Month’s last event, the Children’s Parade, that started at the Tamarind Tree in Greenlands and ended at West Independence Square in downtown Basseterre.

“I was delighted to attend the Child Month 2022 parade this morning, which was held under the theme ‘Recycle: Save the Earth for our Children’s Future’,” said the Ambassador at the end of the walk. “Actually I am very touched that so many young school kids from the pre-schools to primary schools attended the parade.”

Hundreds of children who demonstrated their knowledge of recycling and reusing discarded material by the clothes they wore and other items they displayed were accompanied by their teachers and parents as they took part in the parade. According to His Excellency Ambassador Lin, everyone is an individual living on this planet, and if people do not cherish the earth they might end up damaging it for themselves and for future generations.

“We should save the earth for the future of our generations and our children,” said Ambassador Lin. “That is why we are holding the parade today, and that is why I joined the parade this morning with all the Ministry of Education officials, and just wanted to be part of it and encourage all the school kids to do recycling, starting immediately and into the future.”

A partnership between the Federal Government of St. Kitts and Nevis and the Government of the Republic of China (Taiwan) has resulted in the establishment of St. Kitts and Nevis Solid Waste Management and Recycling Project which was officially launched in March this year. The aim of the project, which is funded by the Taiwan International Cooperation and Development Fund (ICDF), is to help in the management and reduction of waste.

Accompanying Ambassador Michael Lin on the Children’s Parade on Friday, June 24, was the Manager of the St. Kitts and Nevis Solid Waste Management and Recycling Project, Ms Joyce Chang.

“Our focus now is to raise the awareness of every child in this country to start to do recycling in school, and back home they could teach their parents to do recycling,” said Ambassador Lin. “For the young kids to start to know how to recycle all these material, that will help to reduce all the amount of garbage that is created daily, because on average, according to research done by Ms Joyce Chang, in St. Kitts and Nevis everybody produces 1.7 kg per day, which is higher than average that is produced in other neighbouring countries.”

The Ambassador noted that the parade would teach the school children to start the idea of how to reduce, reuse and recycle resources as all the material that is thrown in the landfill is just garbage, but if it is recycled and reused, it could become a resource just like the PET (polyethylene terephthalate) bottles, aluminium cans or metal cans.

“In Taiwan, everybody has to do the recycling, and we have specifically PET (polyethylene terephthalate) bottles and glass bottles, metals, plastics and paper,” observed His Excellency Michael Lin. “But now in St. Kitts, we are starting from the PET bottles, metal cans, and aluminium cans.”

St. Kitts and Nevis Solid Waste Management and Recycling Project has points where such items are collected on specific days of the week both on St. Kitts and on Nevis. Points in St. Kitts are in Conaree at the Airport Roundabout, Buckley’s in front of Best Buy Supermarket, and in Dieppe Bay along the Island Main Road, while in Nevis the collection point is on the empty lot between Delta Gas Station and Ole House Café in Stoney Grove.

“After collecting all these materials, they will be stored at the landfill both in St. Kitts and Nevis, and then we can ship it out for the final treatment in the United States and several different countries,” said the Ambassador. “The money we generate could be put back into the economy, and we could provide financial assistance to the schools or to the communities. That is a target we would like to achieve.”