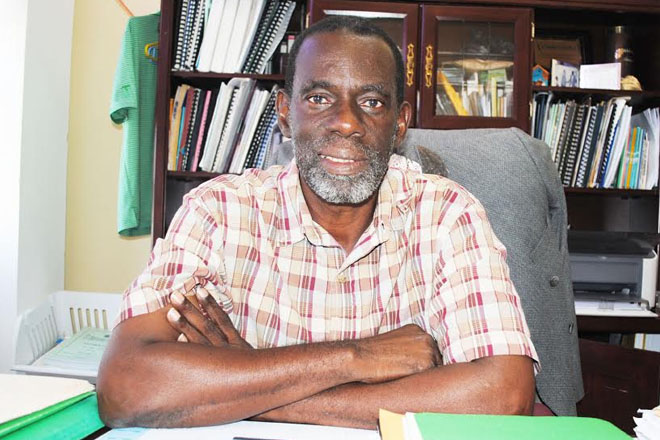 Basseterre, St. Kitts (May 26, 2015) — The Solid Waste Management Corporation SWMC (St. Kitts) is stepping up the delivery its services to the residents of St. Kitts, and to achieve this it has formulated an eleven-point strategy which when implemented will not only see a cleaner island but a rejuvenated workforce.

According to Mr Bridgewater, the eleven areas are Employee Welfare and Empowerment; Advocacy for Sustainability of Corporation; Accounting and Financial Prudence; Collection Efficiency and Effectiveness; Safety/Security; and Landfill Management.

“What I am expecting from this, I am trying to get the staff to come on board when they are planning their stuff,” says Mr Bridgewater. “Every objective that I have should fall into one of these eleven areas.”

Recently the organisation held a retirement breakfast meeting at a city restaurant to honour Mr Cephus Freeman on his retirement after serving for 22 years as a garbage collector. According to the General Manager that is part of employee welfare and empowerment where employees will be given acknowledgement, and recognition awards.

In the area of Advocacy for Sustainability of the corporation Mr Bridgewater points out that he will be agitating with the Board, Ministry of Health, and with Government to find out what kind of funding, and support they would be providing for the organisation to survive.

“We can’t raise the charges that we have unless we get ministerial agreement and finally the Cabinet,” notes the General Manager. “So if we want to raise the fees – environmental fees or the tipping fees – we got to get the okay from the Government.

“It also speaks to the things we are arguing about if the cell is full up, what they would do to make sure we get a new environmentally sustainable cell and things of that nature.”

“The Audited Statements for 2014 are due any time now, so by the time the House meets the next time we will have them to pass them on to our Board who will then present them to the Minister,” observes Mr Bridgewater.

According to the General Manager, Safety and Security runs across the entire organisation as it includes security for workers on the trucks, those operating machines, those on the landfill site, and safety and security at the office where they collect money and someone has to carry it to the bank on a daily basis. He contends that improvement will be done to ensure maximum security.

The organisation has a full-grown Information, Education and Public Awareness programme, as it has popular weekly radio programmes ‘Talking Trash’ on WINN FM; ‘Waste Matters’ on ZIZ Radio, and Freedom FM. There are plans to use a popular town-crier Calypso Reggie on selective times, periods, and zones to send certain messages to the public.

“The other concern for us is transition from mere collection to diversion,” says Mr Bridgewater. “Most of our concern is taken up with collection – collection oriented. I want to move from that into things like what they call the 4 ‘R’s – reduction, reusing, recycling and recovering.”

In the area of Legislative Enactment and Enforcement, the organisation is looking forward to become more efficient and more effective by executing more appropriately the legislation to do with the control and reduction of litter.

“It may mean advocating with the Ministry of Health who in turn will go to the Attorney General’s Chambers and all those who legislate to find a means to introduce more legislation,” comments the General Manager, who also points out that St. Kitts probably has the lowest landfill tipping fee in the world.

“One of the things we want to encourage and to do is to put a levy on every household on the meter, say for ten dollars per month, and all that money goes to Solid Waste directly, not to somebody else who then pays it into Solid Waste. This happens in St. Vincent and the Grenadines, they have it on their water bills, and in Nevis who have it on electricity bills.”

The Solid Waste Management Corporation has deliberately set out to build alliances and partnerships with organisations related to health, like the Environmental Health Department, to physical planning like the Physical Planning and Environment Department, which is part of the Ministry of Sustainable Development, and in so doing they could share information.

Talking on the final point, Human Resource Development, Mr Bridgewater points out that in an organisation like Solid Waste which is strapped for cash, when they are trying to have a strict budget the area that suffers most is training and human resource development.

“This has been the case with us for some time now, but we had improved on that over the past couple of years,” says Mr Bridgewater. “With the assistance of the Japanese Government and the Ministry of Foreign Affairs here, we were able to get people going on training in Japan.”

He mentions that Mr Wilmon McCall the Operations Supervisor went to Japan for training, and Mr Sylvester Wattley, a loader, who travelled there last year where he underwent a six-week training course.

“There is a focus on my part now to do as much training as we could do locally, even if the training simply means some hours per week in computer competence, developing skills and so on, and there are a lot people offering training, and various consultancies doing training in customer relations, customer satisfaction,” states the General Manager.

“We think waste matters, we played on the word, waste matters gives you a general thing, as well as to make the point that waste matters. Beyond that, our proud objectives would be to increase productivity, improve effectiveness, and institutionalise efficiency throughout the organisation.”